My niece, Jayme, was styling hair in her Sumner, Washington salon when a worried woman came into the shop with a frightened look on her face.  The elderly woman said she was picking some things up and was waiting in Tacoma for a ride when a guy she didn’t know picked her up and was threatening her. He drove her to Sumner where she only now escaped from his car.

She apologized for any danger she might be bringing into the shop.  Over and over she spoke her name to my niece while looking over her shoulder to the street where a car was parked at the curb, engine running.  A man sat in the driver’s seat.

She had a couple bags filled with various memorabilia. She was a little disoriented so Jayme asked her if it would be okay if she escorted her the block or so to the police station where she might feel safe.  The woman allowed that would be a good idea.

They stepped out of the shop and took a few steps in the direction of the police station and the woman, with purpose, would not look at the idling car on the curb with the man sitting behind the steering wheel.

As they crossed the street she asked my niece, “Has anything like this ever happened to you before?”

The woman said, “Me neither. And I am twice your age!”  (My twenty-seven year old niece said she was more like three times her age.)

As they made their way step-by-step to the police station, the car that had been parked at the curb with the man in the driver’s seat slowly followed them. The driver put the car in park, got out and asked my niece where she was taking the woman.  “To the police station,” my niece replied.  The man smiled and got back into his car.  It was then that Jayme felt convinced it was a person familiar with the woman and breathed a sigh of relief. 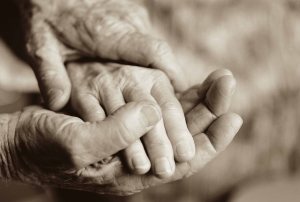 The main entrance to the police station was locked so they went around to the side entrance. The woman saw the car again and slipped her arm into the crook of my niece’s arm and said, “Don’t look at him and pretend you know me.”

The man put the car park and waited with patience outside the police station.  My niece remembered the content of the bags the woman carried. One had a photo album in it and was white and kind of glittery like a wedding album.

With the woman safe in the care of the police, Jayme walked back down to her shop and finished her day.  When she got home her husband was asleep, but she woke him up with tears flowing down her face. She told him the story and asked between sobs, “When I’m crazy will you, will you take care of me?”

Groggily he said, “You’re already crazy and I take care of you.”

What a great question!  When I’m crazy, will you take care of me? Sadly, that won’t happen for some who read these words.  That man in the car patiently waiting outside the salon in Sumner had made a promise and, for God’s sake, he was going to keep it.  That’s old school, but that’s good school.

Our souls can never reach full maturity with only the shallowness of “young love.”  There’s something about old love that has gone through decades of battles, misunderstandings, heartaches and tragedies and yet emerges as a mature love that is eternal.  God-like.

Somewhere right now a kind and gentle man is thumbing through a white photo album with the bride of his youth and trying his best to help her know—though now confused—that she is safe, secure and deeply loved.