…an angel of the Lord appeared to him in a dream, saying, “…you shall call His name Jesus, for He will save His people from their sins.”  Matthew 1:20-21

Two vital questions: “Who names you?”  And “What is your highest priority in life?”  Until you can answer those questions aright, you’ll never know who you are. 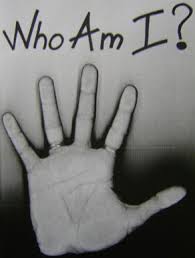 Through work…Here’s the problem with that: If you decide, “I’m going to name myself through my work, through my career, through my achievement, through the money I make,” problems show up because if you’re successful, you’ll find out you’ll lose your family and your health by and large.  If you’re not successful…then, who are you?

Through relationships…This is when your core sense of self comes from who you know.  Or who you are married to or who your parents are.  I am the son of Dub Chambers, I am the father of Caleb Chambers.  I am the pastor’s wife.  Or as James Taylor once said about his wife, “I’m Mr. Carly Simon.

But when your sense of self is determine by a role you play, like being a father, or a wife or friend…you are putting your entire identity in the hands of another human being who may not always have your best interests at heart.

The Bible says these are all cul de sacs—dead ends—because what happens is you think you’re naming yourself, but actually you’re not. Whatever you use to name you becomes your authority.

A man thinks, “I’m going to be a great father.” What happens when something goes wrong with the children? What if they rebel? What if they turn on you? You don’t even have a name anymore because your whole identity is wrapped up in that. All of your meaning goes out the door. You become a shriveled husk.

You do not belong to yourself. Whoever names you is the one to whom you belong. You either belong to God or else you belong to whatever you have turned to find your identity.

How do I know who or what is naming me?  It’s been my experience that it is often connected to that which I have the most emotional energy invested.  And if that naming agent is threatened in any way, I begin to get very desperate.  Check and see who or what triggers these primary emotions in your life:

The irony is this is not a new way of getting an identity. It’s a very old way. Back in Genesis 11, we’re told about the Tower of Babel. How did that happen? A group of people, said, “Come, let us build ourselves a city, and a tower whose top is in the heavens; let us make a name for ourselves…”

The story says they are scattered because they sought to make a name for themselves.

What are you living for?

Jesus knew what he was living for. Your priorities and your commitments are what give you that identity.

You have a last name. Your last name is God’s family name.

But as many as received Him, to them He gave the right to become children of God, to those who believe in His name. John 1:12

Who am I?  I am Joe Christian.  No, that doesn’t sound right.  “Christian” is a caricature in our culture.  But how about, “Joe Christ-Follower?”  I’ve always wanted a hyphenated name. Seriously, at a deeper level, we have to stop trying to name ourselves.

What it means to become a Christian is to say, “Jesus is my Savior, my Redeemer, my Restorer, and my King. He and he alone has satisfied all of the requirements so I’m acceptable before God.”  That is the ground, the base, the foundation for my new identity.

Many Christ-followers are filled with angst, pain and worry and insecurities.  Why?  Because they have forgotten Whose they are. And they have tried to have too many names.

Christian, let me remind  that you have a last name: “Beloved.”

A friend of mine’s twenty-something daughter and son-in-law wrote an article and said something rather profound:

A few months before our wedding, we met with Andie’s Uncle Glenn who would be officiating the ceremony. While we were there, he spoke some wise, paradigm-shifting words that have become a personal mantra for us as we attempt to navigate this season of our life together.

In response to our anxiety over what we were supposed to be doing with our lives, Uncle Glenn gently reminded us that, “The twenties are for learning.”  ~~Team Gandie

Parker Palmer talks about the struggle to find his vocation at high noon of his life and I love this story:

But when I arrived and started sharing my vocational quandary, people responded with a traditional Quaker counsel that, despite their good intentions, left me even more discouraged. “Have faith,” they said, “and way will open.”

“I have faith,” I thought to myself. “What I don’t have is time to wait for `way’ to open. I’m approaching middle age at warp speed, and I have yet to find a vocational path that feels right. The only way that’s opened so far is the wrong way.”

After a few months of deepening frustration, I took my troubles to an older Quaker woman well known for her thoughtfulness and candor. “Ruth,” I said, “people keep telling me that `way will open.’ Well, I sit in the silence, I pray, I listen for my calling, but way is not opening. I’ve been trying to find my vocation for a long time, and I still don’t have the foggiest idea of what I’m meant to do. Way may open for other people, but it’s sure not opening for me.”

Ruth’s reply was a model of Quaker plain-speaking. “I’m a birthright Friend,” she said somberly, “and in sixty-plus years of living, way has never opened in front of me.” She paused, and I started sinking into despair. Was this wise woman telling me that the Quaker concept of God’s guidance was a hoax?

Then she spoke again, this time with a grin. “But a lot of way has closed behind me, and that’s had the same guiding effect.”

I laughed with her, laughed loud and long, the kind of laughter that comes when a simple truth exposes your heart for the needlessly neurotic mess it has become. Ruth’s honesty gave me a new way to look at my vocational journey, and my experience has long since confirmed the lesson she taught me that day: there is as much guidance in what does not and cannot happen in my life as there is in what can and does—maybe more.~~Parker Palmer, Let Your Life Speak

Whose are you? For what are you living? Unless you let Him name you, you’ll never find out who you are.

Let me remind you that for all of eternity Jesus and His father had known divine intimacy and oneness. Then ‘Way’ closed behind Him. In the Garden of Gethsemane, he agonized over what was coming on the cross. He cried out with every primary emotion on the spectrum, “Father, let this cup pass from me. Nevertheless not my will be done, but Thine be done.” Then on the cross, he cried out, “My God, My God why has Thou forsaken me?”

Jesus received his name at Christmas, but He lost it on Good Friday so you could receive your name on Easter.

There’s just something about that name.

I am the beloved of the Most High God. I am an avid reader and writer and have been a continuous learner since my college studies in Ancient Literature and English. I live at the base of Mount Princeton in the Colorado Rockies with my wife of over three decades. I believe I have been put here to tell people that God is not mad at them and to show them the way Home. I am the father of three sons, three beautiful daughters-in-law and four grandchildren. I love to read, tell stories, and spend time in the wilderness.
View all posts by Joe Chambers →
This entry was posted in Uncategorized and tagged Jesus. Bookmark the permalink.