The Beauty of Tears

There are only two things that pierce the human heart.
One is beauty. The other is affliction.
~Simone Weil

What is our automatic assumption about tears?  Something is hurting.  Is that always true?  I recently watched a video of a young mother singing a lullaby to her tiny baby and while smiling, baby-tears streamed down the little chubby cheeks of that baby.

Many years ago my wife and I were watching a television program that showcased young prodigies in various artistic disciplines.  I believe I was reading a book while she watched.  I heard a violin, a piano, and then I heard the voice of an angel.  I looked up and saw a young Charlotte Church singing Andrew Lloyd Webber’s Pie Jesu.

Breathtaking.  I glanced over at my wife and she was weeping.  I had never seen her weep like that before.  I whispered, “Are you Okay?” And she just mouthed one word to no one in particular, “Beauty.”

What is going on there?

I believe that there is something in our souls that aches for beauty.  We were created with an insatiable desire for the indescribable.

face with my hands. My wife asked me what was wrong and I had to turn away from her and the blinding beauty of the peaks that rose in the distance.

Our young boys were loud in the back of the van, my wife was asking me what was troubling me, and Allison Krause was singing with Union Street Station on the sound system, but I couldn’t hear them. I was lost in the beauty of those mountains.

Here, fifteen years later, I can’t fully explain what I felt that day in Wyoming. I can only tell you that if felt as if I glimpsed the face of God and I turned away to weep.

I’ve wept when my heart was overwhelmed by beauty and undone by sin. But there is another weeping that comes when grace penetrates to foundation of our souls. I’ll call them tears of repentance.

There is a scene in the film The Mission that to me personally, is one the greatest moments in all cinema. Robert DeNiro plays a slave trader in colonial Latin America. He had dedicated himself to capturing Indians and selling them as slaves. Jeremy Irons plays a Jesuit missionary who helped convert the Indians, and who defended them.

When DeNiro is thrown in prison for murder, Irons shows him mercy, and ransoms him to come serve in the jungle mission. DeNiro insists on making the long journey to the mountain mission dragging his armor in a bundle behind him. He drags the weight of his sin and his filth to the top — where he meets the same people, now Christians, whose families he had been pressing into slavery. And where, if they killed him, justice would have been served.

As DeNiro is on his knees in the mud with the burden of his past tied to his back, the chief gives an order. Someone picks up a knife and runs to DeNiro and pulls his head upward 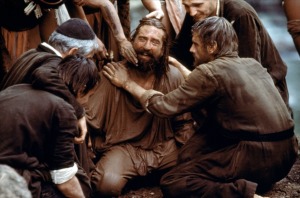 with his face pointing to the very people he had hunted down like animals. The knife flashes and glints in the sunlight as the chief gives another order and the knife cuts the rope to the burden on DeNiro’s back. It tumbles down over a waterfall hundreds of feet; the same waterfall he had just climbed.

He is confused.  He looks into the faces of his former enemies for understanding.  And one by one they begin to laugh.  Not the laughter of contempt, the laughter of forgiveness and delight. And suddenly the face etched in pain and agony for all the guilt of his selfish life begins to melt away to first a smile, then a grin, and finally an open-mouth laugh of joy.

God treasures the tears of repentance.  They are His precious jewels because they cost so much.  The price of our pain when we walked away from Eden and the pain of the cross when Jesus walked up a hard-panned road to a hill called Calvary and died to bring life, love to a creation designed to pulse with beauty.

You number my wanderings; put my tears into Your bottle.  Psalm 56:8

I am the beloved of the Most High God. I am an avid reader and writer and have been a continuous learner since my college studies in Ancient Literature and English. I live at the base of Mount Princeton in the Colorado Rockies with my wife of over three decades. I believe I have been put here to tell people that God is not mad at them and to show them the way Home. I am the father of three sons, three beautiful daughters-in-law and four grandchildren. I love to read, tell stories, and spend time in the wilderness.
View all posts by Joe Chambers →
This entry was posted in Uncategorized and tagged beauty, Jesus, Repentance, Tears, Weeping. Bookmark the permalink.

1 Response to The Beauty of Tears