But the Lord hurled a great wind upon the sea, and such a mighty storm came upon the sea that the ship threatened to break up.  Then the mariners were afraid, and each cried to his god. They threw the cargo that was in the ship into the sea, to lighten it for them. Jonah, meanwhile, had gone down into the hold of the ship and had lain down, and was fast asleep.  Jonah 1:4-5 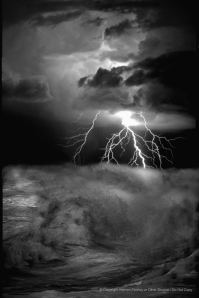 This storm is not a punishment but a grace. God is doing a nautical intervention in Jonah’s life. This story is compressed, high speed and hi-def depiction of what has happened in my life and, perhaps, yours.

Sometime God wakes us up with storms not because he doesn’t care for us, but precisely because he does care for us. God brings us storms for our sakes. This is a storm of love from God towards Jonah to woo him back.

About 15 years ago I was leading a group of adults on a backpacking trip in the mountains of Colorado and we decided to climb a 13, 500 foot peak called Broken Hand.  It was a beautiful day so we packed a light lunch and minimal clothing and set off to summit this peak.  There are rock-band cliffs along the face of the mountain and one little cut in the cliffs that requires you to use four points on the mountain. (Hands and feet on the ground.) But this section is only about 15 feet or so.  We made it up and on up the grassy tundra above the rock-face to the summit.  When we got to the summit we could see a storm had blown in from the southwest and would be on us before we could get down.  I knew this was a possible dangerous situation.

We ate our lunch on the move and started down.  The storm overtook us and enveloped us in a dense cloud and visibility was reduced to a few feet.  The wind picked up and the rain started pelting us.  There was no shelter.  We put what clothing we brought with us on and yet we all started to shiver.  This is dangerous when you are tired and wet because hypothermia is a real threat.  Our trouble was that we couldn’t see our route down.  Rather than have the group tire out and increase the risk of hypothermia, I had them huddle together and I started probing down the mountain searching for the 15 foot cut down the rock cliff.  I couldn’t find it. I fell several occasions, slipping on the wet grass and rock.  I tore fingernails out at the quick trying to cling to rock face like a cat.  I was panicking.  People were going to die on the mountain.

I prayed and begged God to show me a way down.  I decided to take the group down an unexplored gully on a snow ribbon.  One slip and there would be instant death.  We kicked steps down and finally descended beneath the cloud ceiling and could see we were going to make it.

That storm was a harbinger from God.  I was on an arrogant path of destruction that would lead to the loss of my integrity and my ministry. He was calling me back to Himself.  As I laid in my tent that night and wept that I had nearly lost everyone on the mountain in that storm, it was as if God were saying, “You haven’t seen anything yet. I have another storm I’m going to hurl at you if you don’t return to me.”

The Broken Hand storm was a breeze compared to the storm that was gathering just over the horizon of my life.  But that final storm was the best thing and the worst thing that has ever happened to me.

Could it be that the storms that are in your life right now are not a punishment, but a grace to help you run to God instead of away from Him?

Jonah falls into a deep sleep in the bottom of the boat, desperately hoping to not have to think about God and then he was pulled up out of the bottom of the boat and confronted with a storm that frightened the seasoned sailors. Those sailors are practicing an ancient pagan practice to figure out what the fates or gods want done and as they spin the bottle (so to speak) it points to Jonah.  Now Jonah comes face-to-face with God and His storm.

They ask him the questions that define his life.  Who are you? Who do you worship?

“I am a Hebrew,” he replied. “I worship the Lord, the God of heaven, who made the sea and the dry land.”   Then they said to him, “What shall we do to you that the sea may quiet down for us?” For the sea was growing more and more tempestuous.  12 He said to them, “Pick me up and throw me into the sea; then the sea will quiet down for you; for I know it is because of me that this great storm has come upon you.”  Vs.9, vs. 11-12

How can you and I be sure that when we are drowning in our storms that we know that God intends for those storms to bring about love? We have something Jonah did not have. For you see, the story of Jonah points to one greater than Jonah.

In Jesus, God would throw himself into the storms of our darkness, dysfunction, and death.  And no one would save Jesus, he would go all the way down to death; for you and for me. We can know, in the moments of our storms, and the moments when we feel like we are drowning, that underneath all of those waves is a firm foundation called love.

My Hope is Built on Nothing Less

When darkness veils His lovely face,

I rest on His unchanging grace;

In every high and stormy gale

My anchor holds within the veil.

On Christ, the solid Rock, I stand;

All other ground is sinking sand.

Could it be that the storms that are in your life right now are not a punishment, but a grace to help you run to God instead of away from Him?

1 Response to Storms of Grace