The Gift of Perspective

One of the great sorrows which came to human beings when Adam and Eve left the Garden was the loss of memory, memory of all that God’s children are meant to be. ~Madeleine L’Engle

When we lived in the Pacific Northwest there was a gulch with fir trees down in the draw along with maple and cypress. The bottom by the creek is virtually impenetrable with English ivy and pesky blackberry bushes. In the summer and fall, the green foliage covers to the extent that you can’t see the forest floor, the creek, or the rotting rowboat that leans against the giant maple.

However, when autumn came around and the trees started to lose their summer clothes, the ivy and vines begin to retreat to wherever they go in the winter. From my elevated back deck, I could see deeper into the wooded bottom, almost to the creek that flows year-round in the draw. The rowboat still wasn’t visible because the bank is too steep and the angle isn’t right from the deck, but a few feet away I could see the faint outline of a metallic and skeletal structure. 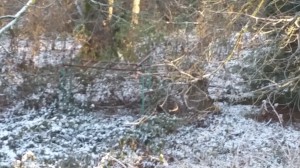 The leaves fell like small kites landing gently on the ground revealing what’s left of a child’s ancient swing set. Once upon a time, the wooded backyard was ruled by laughter and joy. Children squealed with glee on that equipment, but no child has touched it in years. However, the equipment stood tall and erect amongst the firs, ivy, and blackberry bushes. I suppose the metal will eventually rust away and the elements will leach into the loamy soil; maybe the relentless blackberry bushes will pull it down like prey to be devoured by moisture and oxidation into the brown leaves. But for now, the metal, paint, bolts, and nuts stood in defiance of the inevitable. But make no mistake, death and decay will overtake the old joy-making machine.

As I stood on my deck with a cup of hot coffee in my hand looking at that partially obscured swing set dusted with a confection of snow, I thought it an apt parable of my soul. There are some harsh realities, always present in my character, and they are being revealed during the darker days of melancholy. I could see the scaffolding of accomplishment, upon which I depended for so many years to bring me joy and a sense of well-being, here symbolically revealed in all of its decrepit glory right before my eyes in that creek bottom. To paraphrase Shakespeare, “Now is the winter of our discontent, made glorious summer by this sun of my youth.”

I wrapped the fleece closer to my sagging shoulders, I stared at the playset. In it, I saw meaning, deep meaning. Sociologists suggest that people have a difficult time describing or even identifying something for which they have no vocabulary. Some even suggest that you can have a hard time experiencing something for which you have no corresponding word. The Greeks had a word for the feeling you have when you are happy: Makarios. It is a feeling of contentment when you know your place in the world and is satisfied with that place. If your life has been fortunate, you should feel Makarios.

Those tubes and chains of metal in the bottom of the gulch reminded me of wasted years building my life on false sources of what I longed for—joy unspeakable and full of glory. A scaffolding of career success, peer approval, solid reputation, and a sense of accomplishment. And yet they were all mere child’s play when viewed from the elevated platform of late middle life. They were illusory. They would not withstand the relentless ravages of time and the toxicity of sin.

We used to sing a song in the church I grew up in that makes much sense to me these days:

When darkness veils His lovely face,

I rest on His unchanging grace;

In every high and stormy gale

My anchor holds within the veil.

On Christ, the solid Rock, I stand;

All other ground is sinking sand.

I wonder if we would put our weight on something altogether different at an earlier age than the external structures this world prizes so highly if we might feel content with our place in the world. What if we stood firmly on the bedrock certainty that we are loved by our heavenly Father? Unshakably loved. If we began earlier in our pilgrimage to rest in that safe knowledge of unconditional acceptance founded on grace, the structure hidden in the undergrowth of our soul might remain hidden, for joy is shy that way. But the day is coming when what is hidden will be revealed. If not in this life, in the life to come—for eternity waits for no one. Often what is most shy and obscure about our souls is what matters most.

Give care upon that which you play in this life. Soon enough we will skip and play in the company of the Joy-Giver in an eternal garden.

And laughter will once again rule the day.

I am the beloved of the Most High God. I am an avid reader and writer and have been a continuous learner since my college studies in Ancient Literature and English. I live at the base of Mount Princeton in the Colorado Rockies with my wife of over three decades. I believe I have been put here to tell people that God is not mad at them and to show them the way Home. I am the father of three sons, three beautiful daughters-in-law and four grandchildren. I love to read, tell stories, and spend time in the wilderness.
View all posts by Joe Chambers →
This entry was posted in Uncategorized and tagged Change, downward spiral, environment, faith, God, grace, healing, Love, midlife, success. Bookmark the permalink.

1 Response to The Gift of Perspective