People of the Towel

When you realized how much God has given you in Jesus, you can spend yourself on others with no thought to whether there will be a return on investment.  You give yourself away like philanthropist and not like an investor. Why? Because you have a limitless wealth of grace from God.

So when He had washed their feet, taken His garments, and sat down again, He said to them, “You also ought to wash one another’s feet. For I have given you an example, that you should do as I have done to you. John 13:12,14-15

The word “example” in verse 15 is a word in the ancient world used to describe an artist who would create a pattern or template so that other, less talented artisans, could use to recreate what the master had created.

Jesus is saying that when we are united to his life; his life-style becomes the pattern or the template for our life. When Jesus washed feet as an act of selfless service he was doing something that slaves did. But when you and I follow Jesus and descend into greatness, when we spend ourselves for other people and put their needs ahead of our own, even if no one notices it, we are doing what our Creator-God did.

You probably won’t realize it at the time. You’ll be too busy thinking of the people you’re working for and with. But, as you look back, you may be startled by the joy of realizing that as you walked into that house, that hospital, that place of pain or love or sorrow or hope, Jesus was walking in, wearing your skin, speaking in your tone of voice. ~ N.T. Wright, John For Everyone Part Two page 49

You and I are how Jesus intends to serve our friends, enemies, and our neighborhoods. As we take up the towel and stoop to serve, we are God’s last best hope for the world.

Philip Yancey writes in his book Vanishing Grace: What Ever Happened To The Good News?…

John Marks, a producer for television’s 60 Minutes, went on a two-year quest to investigate evangelicals, the group he had grown up among and later rejected. He wrote a book about his findings, Reasons to Believe: One Man’s Journey Among the Evangelicals and the Faith He Left Behind. The church’s response to Hurricane Katrina turned the corner for him and became a strong reason to believe. One Baptist church in Baton Rouge fed sixteen thousand people a day for weeks; another housed seven hundred homeless evacuees. Still another church served as a distribution point for fifty-six churches, and churches in surrounding states sent regular teams to help rebuild homes for years after the hurricane, long after federal assistance had dried up.

Most impressively to Marks, all these church efforts crossed racial lines and barriers in the Deep South. As one worker told him, “We had whites, blacks, Hispanics, Vietnamese, good old Cajun. . . . We just tried to say, hey, let’s help people. This is our state. We’ll let everybody else sort out that other stuff. We’ve got to cook some rice.”

I would argue that this was a watershed moment in the history of American Christianity . . . nothing spoke more eloquently to believers, and to nonbelievers who were paying attention, than the success of a population of believing volunteers measured against the massive and near-total collapse of secular government efforts. The storm laid bare an unmistakable truth. More and more Christians have decided that the only way to reconquer America is through service. The faith no longer travels by the word. It moves by the deed. (page 137 Kindle)

Will you serve each other, your community and the world?  Many churches serve each other and that’s about it. It is a healthy, Christlike church that loves God, loves each other and serves the world. There are countless little things that you can do that will teach you humility and bring civility to this hostile world. 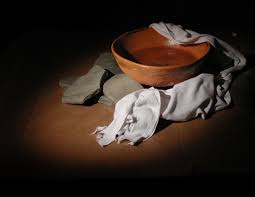 One day the leaders in your community will come to you and say, “I may not agree with your doctrine, but it is better for us that you are here.”  They will be glad that there is a group of people so committed to personal and social restoration.

And the scripture will be true about you that says, “When the righteous prosper, the city rejoices…” Proverbs 11:10

All because a group of dirty-footed, and sullied-souled believers descended into
greatness by following their Savior as he stooped to serve and knelt to love.

I am the beloved of the Most High God. I am an avid reader and writer and have been a continuous learner since my college studies in Ancient Literature and English. I live at the base of Mount Princeton in the Colorado Rockies with my wife of over three decades. I believe I have been put here to tell people that God is not mad at them and to show them the way Home. I am the father of three sons, three beautiful daughters-in-law and four grandchildren. I love to read, tell stories, and spend time in the wilderness.
View all posts by Joe Chambers →
This entry was posted in Grace, Humility, N.T. Wright, Philip Yancey and tagged Christians, Humility, Jesus, Servant. Bookmark the permalink.

1 Response to People of the Towel