Is It Worth It?

They sing a new song:

“You are worthy to take the scroll
and to open its seals,
for you were slaughtered and by your blood you ransomed for God
saints from every tribe and language and people and nation;
you have made them to be a kingdom and priests serving our God,
and they will reign on earth.”  Revelation 5:9

Not going to lie, there have been times when I’ve asked myself if being a minister was worth it. On more than one occasion I’ve asked myself, “Has it been worth the hours of listening in coffee shops, the gallons of coffee, and the thousands of words shared to lead, guide, and direct fellow pilgrims? Has been worth the countless text-prayers, pages of journal-prayers, and the hundreds stories that I heard and hold as treasure in my heart–was it worth it?

Thoughts like those in times like these make me wonder what the answer would be if we asked some of the heroes of the bible the same question.

To ask Abraham, “Was it worth it to leave Ur of the Chaldean, wander around Canaan, live in a tent, and in the end have nothing to show for it other than one son, a funeral plot and still unfulfilled promises of God?”

To ask Moses, “Was it worth it to give up the pleasures and treasures of Egypt to lead a million of whining former slaves through the wilderness for 40 years and never even get into the promised-land yourself?”

To ask Jeremiah, “Was it worth it to preach over 60 years and never have even one positive response to your message?”

To ask Mary, “Was it worth it to say ‘Be it unto me according to your will,’ when that submission resulted in a Son who was crucified on a Roman cross?”

To ask John, “Was it worth it to preach the gospel and plant churches all over the known world, and in the end, wind up in exile on Patmos?”

Have you ever asked yourself, “Is it worth it to live a life of faith in God when no one else is?” Is it worth it to get up on Sunday morning and go to church when all your friends are in the mountains or at the beach enjoying a bright day?

That encounter reminded me of a story I read.

There was a woman who had been diagnosed with a terminal illness and had been given three months to live. So, as she was getting her things in order, she contacted her Pastor and had him come to her house to discuss certain aspects of her final wishes.

She told him which songs she wanted sung at the service, what scriptures she would like read, and what outfit she wanted to be buried in. Everything was in order and the Pastor was preparing to leave when the woman suddenly remembered something very important to her.

“What’s that?” came the Pastor’s reply. 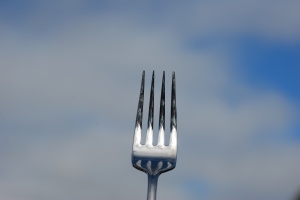 “This is very important,” the woman continued. “I want to be buried with a fork in my right hand.”

The Pastor stood looking at the woman, not knowing quite what to say.

In all my years of attending socials and dinners, I always remember that when the dishes of the main course were being cleared, someone would inevitably lean over and say, ‘Keep your fork.’ It was my favorite part because I knew that something better was coming…like velvety chocolate cake or deep-dish apple pie. Something wonderful, and with substance!”

So, I just want people to see me there in that casket with a fork in my hand and I want them to wonder “What’s with the fork?” Then I want you to tell them: “Keep your fork…the best is yet to come.”

At the funeral people were walking by the woman’s casket and they saw the cloak she was wearing and the fork placed in her right hand. Over and over, the Pastor heard the question, “What’s with the fork?” And over and over he smiled.

During his message, the Pastor told the people of the conversation he had with the woman shortly before she died. He also told them about the fork and about what it symbolized to her.

He was right. So, the next time you reach down for your fork let it remind you, ever so gently, that the best is yet to come.

Is it worth it?

He is worthy of every prayer.

He is worthy of every act of obedience.

He is worthy of every temptation ever resisted.

He is worthy of every song of worship ever sung.

He is worthy of every tear of repentance ever shed.

He is worthy of every ounce of labor ever expended.

He is worthy of my life.

He is worthy of the church’s life.

So, keep your fork. The best is yet to come.

I am the beloved of the Most High God. I am an avid reader and writer and have been a continuous learner since my college studies in Ancient Literature and English. I live at the base of Mount Princeton in the Colorado Rockies with my wife of over three decades. I believe I have been put here to tell people that God is not mad at them and to show them the way Home. I am the father of three sons, three beautiful daughters-in-law and four grandchildren. I love to read, tell stories, and spend time in the wilderness.
View all posts by Joe Chambers →
This entry was posted in Uncategorized and tagged Christian, Christian service, God, grace, hope, Jesus, ministry, worry, worship. Bookmark the permalink.

3 Responses to Is It Worth It?