“The kingdom of heaven is like leaven, which a woman took and hid in three measures of meal till it was all leavened.”~ Jesus

The bedraggled man sat in my office and tried to wet his lips, but his tongue was too dry. His shoulders were rounded and stooped as if he carried the world. His eyes kept flitting around from one window to the next, glancing at me furtively. Finally, he’d gathered enough spit to speak.

“Pastor Joe, your sermon yesterday on hope and leaven made me think of something that happened to me when I was a little boy. I don’t know why, but I feel as if I’m supposed to tell you this story.

“I was eight years old when my grandmother remarried a man named Bob. During the summers my mother would take us up to their ranch in northern Texas for a visit. Grandpa Bob sat me on his knee, tussled my hair; told me stories.  I liked Grandpa Bob. He let me drive the tractor and feed the chickens.

“They had a maid that worked for them, cleaning, cooking and generally taking care of the house.  Her name was Hattie. She was a beautiful, large black woman. She made the best biscuits in the world but she barely spoke. When I was in the sitting room with my mom and grandparents, I could hear Hattie in the kitchen as she slammed cabinet doors and banged pots and pans.

“Don’t break all the dishes, Hattie.” Grandpa Bob would yell out to her with a grin.  Then he turned to me and said, “Hattie can’t hear a lick. She doesn’t realize how hard she’s banging stuff.”

“My mother had me stay with them at the ranch for the summer with Grandpa Bob and my Grandma. Grandpa took me everywhere with him. We went to town to the feed store. He took me to the Town Talk Café for breakfast. He took me to the courthouse and we sat on some benches with other old men and they told stories and laughed.

“One Friday evening we went to a large meeting in a farmer’s field. There were lots of men there and they had their cars and trucks all in a circle with their headlights pointing to the center. In the middle of the circle of headlights was a large oak tree.

“Grandpa Bob had a wooden box that he put in front of his truck and he stood up on it and began to speak. Everyone listened to him. It was like he was their boss or something. I couldn’t understand everything he said but it sounded as if he was angry. I’d never heard him speak in anger before that night. He was yelling at the black man who was being held by the arms under the tree. I was sitting in the front seat of the car and grandpa Bob’s back was to me and I couldn’t make out everything he said, but then they put a rope around the black man’s neck and pulled him up in the air from a rope they had tossed over the limb of the tree. The man kicked and kicked and kicked and kicked until he didn’t kick anymore.

The man stopped, wet his lips, and wiped a tear from his eye.

“Pastor Joe, it was the most horrible thing I’ve seen in my life. I was only a boy. Who takes their grandson to something like that?” he asked.

All I could do was shake my head in sadness.

He continued, “On the way home Grandpa Bob told me over and over again about how we needed to remind those people of their place and that if they ever started getting ideas like that black-no-good-son-of-a-bitch-preacher, King—then all of society would come unraveled.

“While he talked I kept seeing that black man’s feet kicking and kicking and then going still.

“Later that night I was in my bed and couldn’t keep from crying so I sobbed in my pillow. Directly, I heard the door to my room open. I turned my head towards the door thinking it might be Grandpa Bob coming to tell me to stop crying, but silhouetted against the hallway light was the round figure of Hattie. She sat on the edge of the bed and stroked my face. Her hands smelled of cinnamon and honey. She patted my chest with her thick black hand, and the more she was tender with me the more I could see that man’s feet hanging from the tree, and I cried all the more. 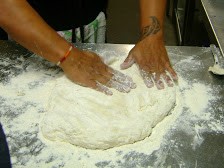 Then I heard her softly begin to sing:

“When she was finished she patted me on the head and quietly stepped out of the room.

“The next day I heard a man preaching on the radio from the kitchen. When I went in and sat down at the table I saw Hattie washing dishes and she was listening carefully to the preacher man. She saw me come in and asked me if I wanted pancakes for breakfast.

“I must have had a shocked look on my face thinking about the song she sang to me the night before and now her listening to the radio because Hattie looked at me sternly and yet with a hint of kindness and said, “You can keep a secret can’t you?” I nodded my head. She said, “I’m only pretending to be deaf so’s I can hear what Mr. Bob is planning and warn my people when I hear something’s coming that’ll bring them harm. I’m like leaven in the loaf that the Bible talks about. He don’t know I can hear, so let’s keep it that way, Okay? One day, judgment run down as waters, and righteousness as a mighty stream like Dr. King say.”

“Yes, boy, I’m scared. But God knows what He’s doing. I do my part and he do His part and all will be well one day.”

“From that day on my step grandfather did his best to fill my head with hate and Hattie would fill it with love every night.

“In time my grandparents died and I lost track of Hattie but in the early nineties I went back to that community to look for her. I went to the only cemetery in town and had the hardest time finding her.  Eventually I found her in the “colored section.” The only marker on her grave was a small metal plate with a number twenty-seven. I vowed that when I could get the money I’d get her a nice stone.

“I’ve never had enough money, but no one has marked my life like Hattie. She never spoke an ill word about my grandma or grandpa Bob. She just filled me with love whenever they weren’t around. Told me stories, smiled at me and sang. And, Pastor Joe, she could sing like an angel and that always gave me hope.”

He took a sip of water from the Styrofoam cup and thanked me for my time and excused himself.

I sat in my chair—slack-jawed. But I kept humming that tune all day. I couldn’t get it out of my head.

The leaven of the gospel of the Kingdom hid its way into her life and was kneaded into Hattie’s soul and there lay–until a little boy needed a song—and today I’m telling you their story. That’s how the Kingdom spreads.

So, get your hopes up and sing.

I am the beloved of the Most High God. I am an avid reader and writer and have been a continuous learner since my college studies in Ancient Literature and English. I live at the base of Mount Princeton in the Colorado Rockies with my wife of over three decades. I believe I have been put here to tell people that God is not mad at them and to show them the way Home. I am the father of three sons, three beautiful daughters-in-law and four grandchildren. I love to read, tell stories, and spend time in the wilderness.
View all posts by Joe Chambers →
This entry was posted in Uncategorized and tagged hope, Jesus, leaven, lynching, racism, song. Bookmark the permalink.