I grew up nine miles from town, three miles from our nearest neighbor, at an elevation of 9,000 feet in Colorado.  One year my dad, brother, sister, and I went to the woods half a mile away to find our Christmas tree. We post-holed through the crusted snow from tree to tree.  “How about this one, Dad?” Again and again, he said no. “But it’s perfectly shaped,” we would respond.  “Let’s leave the pretty ones in the forest.”  “Why, Dad?” “So God can enjoy them in his forest,” my dad replied.

Finally, we heard, “Here it is.”  We groaned at the first sight of it. It was medium height, sparsely branched, and one side was almost bereft of branches.  The crown drooped.  The color was pale green.  The trunk was crooked as a dog’s hind leg.  “Perfect,” Dad said.  “Your mom can make it beautiful once we get it into the house.” Down on his knees in the crunchy snow, he placed the bow saw against its bark and began to cut down the tree. 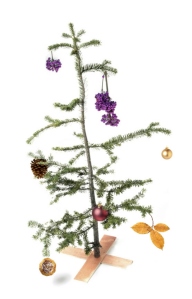 I remember looking at my brother and sister with raised eyebrows.  I think one of them said, “Mom’s not going to like this.”

I don’t remember how my mom felt about the perfectly imperfect tree, but she and we threw every ornament in the house on it. We turned the bareness towards the wall.  We threw silver streaming icicles on the branches; we shredded cotton balls and threw them on the desperate needles for snow.  Large baseball-sized globe ornaments went on the bottom and incrementally smaller ones towards the top.  Egg-sized lights were strung all around.  A star was placed at the bent crown.   With an adjustment here and there, a final turn of the tree for the best angle in the family room, and we were finished.

That can happen again this year in your home around your tree.  The reason we celebrate gifts under a tree is because of another tree; a rough-sawn, blood-soaked tree.  One no one wanted but is now treasured.  Not because of its own intrinsic beauty, but because by dying on that ugly tree, Jesus made it beautiful.

On a hill far away stood an old rugged cross,

The emblem of suff’ring and shame;

And I love that old cross where the dearest and best

For a world of lost sinners was slain.

Linger at that ugly, ancient tree and receive your gift of acceptance, love, and hope.