…As he came up from the water, suddenly the heavens were opened to him and he saw the Spirit of God descending like a dove and alighting on him. And a voice from heaven said, “This is my Son, the Beloved, with whom I am well pleased.” Matthew 3:16-17

When we immerse ourselves into the water at our baptism, it signifies that our lives are attached to Jesus’ life. We are, as the Apostle Paul so often said, ‘in Christ.’ Jesus’ story becomes our story. So, if you belong to Jesus, God the Father looks at you the way He looks at Jesus at this moment in the Jordan River when the Heavens are parted and God’s presence descends and a warm fatherly voice speaks such wonderful words of affirmation.

As one New Testament scholar put it… 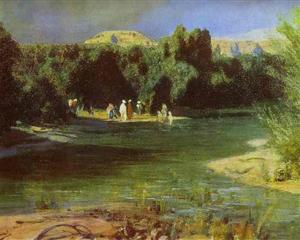 All the kindness heard in the Father’s Voice for his only true Son is conveyed to us in baptism. ~ Dale Bruner

It certainly is not always easy to hear that voice in a world filled with voices that shout: “You are no good, you are ugly; you are worthless; you are despicable, you are nobody—unless you demonstrate the opposite.

Let me be so bold as to say that my sin-battles in this life that I have lost have always been because I have forgotten who I am.

As soon as we become spiritually deaf to the voice that calls us the beloved, we are going to look someplace else to make us the beloved. ~Henri Nouwen

If you belong to Jesus, your baptism is God’s promise that as He looks at your life, He looks at you and says, “This is my son, my daughter—my beloved. And with you I am well pleased.”

If you are a Christian this is what is most true about your life. Honestly, this identity is what all of us need to build our lives on. But most of us build our lives on wherever we think we can find that kind of affirmation.

A few years ago I hiked the Pacific Crest Trail and one of the nights I stayed at a log cabin shelter called Brown’s Cabin. Inside it was a large note book for hikers to sign and leave a message or two. I leafed through the notebook and there was one page that had at the top these words, “Before I die___________.” There were many answers scribbled below than spanned from the profound to the profane. But the one that caught my eye was printed in such small font that I had to bend close to read it. It said, “Before I die I want to be loved.”

This is what all of us cannot live without and will go to extraordinary lengths to find. Why do so many folks that you know exhaust themselves looking for the affirmation of a boss they don’t even like? Why do so many lurch from one unhealthy relationship after another? Because none of us can live without someone saying, “You are my beloved. I approve of you. I am proud of you.”

A journey into becoming a deep, wise, and mature follower of Jesus is learning to build our entire lives around the truth of the words we hear spoken on the banks of the Jordan River: “You are my son, my daughter, the Beloved, with whom I am well pleased.”

When Martin Luther was hold up in a castle translating the Greek Bible into German so that for the very first time somewhat regular folks could read the Word of God for themselves and while he was doing this he struggled mightily with doubt and discouragement from what he understood to be the devil. And he was known to not only throw the occasional ink pots at whatever was tormenting him and causing him to doubt God’s promises, but while doing so he could be heard throughout the castle grounds shouting “I am baptized! I am baptized!”

Luther was hanging for dear life to what God says was true about who he was—that he was God’s beloved.

I am the beloved of the Most High God. I am an avid reader and writer and have been a continuous learner since my college studies in Ancient Literature and English. I live at the base of Mount Princeton in the Colorado Rockies with my wife of over three decades. I believe I have been put here to tell people that God is not mad at them and to show them the way Home. I am the father of three sons, three beautiful daughters-in-law and four grandchildren. I love to read, tell stories, and spend time in the wilderness.
View all posts by Joe Chambers →
This entry was posted in Uncategorized and tagged baptism, healing, Identity, Jesus, soul care, spiritual formation. Bookmark the permalink.

2 Responses to The Beloved