“In the beginning, God created…”

Most of us have had experiences in nature where we have felt a staggering sense of complexity and diversity, breathtaking beauty, astonishing creativity, and added to all of that, the joy of discovery we have a Creator God.

I grew up living at 9,000 feet above sea level in the mountains of Colorado. I’ve always felt cradled in the very hands of God in the mountains. I remember meadows of wild flowers that had more colors than a Monet landscape. 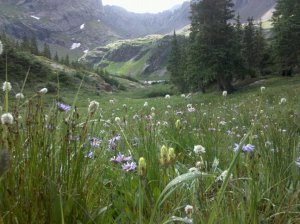 Of spending summer nights in the crisp night air at that high altitude and gazing up at the skies with my brother, as we would camp out without a tent, and watch shooting stars streak across the obsidian sky leaving moments of light that looked like phosphorus strands of angel hair.

I have seen the sunsets on those mountains splash them with an alpine glow of pink that made them turn crimson right before our eyes and my father telling us that it was that blood-red hue at sunrise and sunset that gave them their names by Spanish Conquistadors hundreds of years ago…Sangre De Cristo…Blood of Christ.

The lush forest in the Quinault valleys in the Pacific Northwest are some of the most spectacular examples of primeval temperate rain forest in the lower 48 states. Storms off the Pacific Ocean drop between 12 to 14 feet of rain every year. FEET!

Large, old trees. The dominant species are Sitka spruce and western hemlock, but other conifers and several deciduous species grow as well. Many are 100s of years old and can reach 250 feet in height and 30 to 60 feet in circumference.

There are so many things in our world that if we pause to take the time, will not only take our breath away and move us, but cause us to be reconnected with something inside us that is drawn to the God who created them.

They arrived in the parking lot on one of the rims right before sunrise. The Dad said to his eight-year-old son, “Do you trust me?” Eight-year-old kid said, “Of course, I trust you, dad.” So he held his son’s hand, and he walked him right up to the edge of the rim.  He told his son to stay there and keep his eyes closed until he told him. Then he waited until the sun came up. Right at that moment when the streaks of light came across the top of the Canyon, he said to his son, “Open your eyes.”

He said for the next 30 seconds, his son shook his head from side to side. His mouth just hung open. Then he looked up at his father with tears in his eyes, and he repeated over and over again, “I had no idea. I had no idea.”

When has following God evoked in you that sense of “I had no idea”?

“God, who made the world and everything in it, since He is Lord of heaven and earth, does not dwell in temples made with hands…. so that they should seek the Lord, in the hope that they might grope for Him and find Him, though He is not far from each one of us.  Acts 17:24,27

There’s something about creation that reminds us not only of the greatness and the creativity of God, but it reminds us that He is near…this God who made the world.

Even David Hume, who was considered the father of modern skeptics, wrote that the whole frame of nature bespeaks an intelligent Author.

In the beginning God created the heavens and the earth.  Genesis 1:1

That ten word sentenced changed the world.  And it tells me that, while infinitely distant from my Creator-God in degree, I am not as far away in kind.  For I have been created in His image and this creation is the parchment upon which He is writing a story of grace, redemption and restoration.

He loves me, and this wild world is telling me that at every turn.

C.S. Lewis talks about when we enjoy the wonder of creation. All of that enjoyment spontaneously should overflow into gratitude or praise. That gratitude and praise is almost like our inner spiritual health being made audible. It doesn’t just merely express our gratitude; it actually completes the enjoyment of it.

I hope many times this week you have that experience and get reminded of the name of God as Creator.

I am the beloved of the Most High God. I am an avid reader and writer and have been a continuous learner since my college studies in Ancient Literature and English. I live at the base of Mount Princeton in the Colorado Rockies with my wife of over three decades. I believe I have been put here to tell people that God is not mad at them and to show them the way Home. I am the father of three sons, three beautiful daughters-in-law and four grandchildren. I love to read, tell stories, and spend time in the wilderness.
View all posts by Joe Chambers →
This entry was posted in Uncategorized and tagged beauty, creation, God, soul care, worship. Bookmark the permalink.