Have you ever been thirsty?  I don’t mean the average thirst where a drink of water sounds good after a long walk or after working in the garden on a hot summer day. I mean really — really thirsty…where your tongue sticks to the roof of your mouth and all you can think about is water. 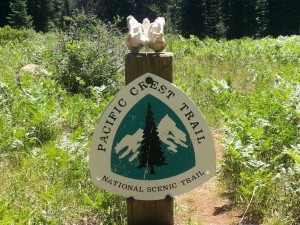 Washington, some 460 miles- averaging 15 miles a day. One of the biggest challenges in southern Oregon was the lack of water.  It was an unseasonably warm August so the temperatures were regularly in the 90s.

I had a set of maps that told me the most reliable water sources along the trail and I quickly learned that when the map says “seasonal source”, it means dry in August. So planning and carrying enough water was pretty critical to making it from one destination to another.

At one point ten days into the hike I met a man traveling south while I was traveling north and I asked him about water sources that he might have passed before he got to me.  He said that trail angels had stashed several 5 gallon buckets of water at the intersection of a highway and the trail twenty five miles north of my position.

I loaded up five liters of water and rationed myself for the day and a half and timed it that I would run out of water two or three miles short of the water cache he told me about.  Everything went fine for the next couple of days.  The temperature soared to 92 degrees and I ran out just when I thought I would, but was comfortable knowing that there would be water where the guys said there was.

As you might imagine when I got to the place he said there would be water—there was none. I searched and searched and came up empty. My tongue had begun to swell and I began to get a little punchy in the head. I looked at my map and saw that the nearest water was at Crater Lake resort area about a mile away.

I sat in the shade of a tree and felt my body actually go into a little bit of a panic.  A sense of desperation came over me.  Here’s the funny part: I would be walking on a blacktop highway into the National Park and people would be driving by, so I was in no real danger. I could flag someone down if I was in really bad shape, but my body didn’t know that, and I could really feel the sense of desperation in my body even though my mind knew I was safe.

At different points in my life, for spiritual reasons, I’ve taken prolonged fasts from food, but there is nothing that compares to the desperate urgency the body feels when it thirsts.

Thirst is something we experience when the pituitary gland secretes two hormones in the body.  One causes a physical reaction in the kidneys and the other causes the more complicated activity of the hypothalamus to send signals to the salivary glands to reduce secretions. I discovered many years ago that just thinking about thirst can make you thirsty — it causes the hypothalamus to start talking to the salivary glands.

Physical thirst can be excruciating and dangerous. Dehydration will get you into serious difficulty in a hurry. But an nnsated spiritual thirst can lead to a parched life and eternity.

The metaphor of thirst is used to describe the parched, arid and dried up state of life that we find ourselves in when the living God is not at the very center of our lives.  A life without God is a thirsty and parched life. 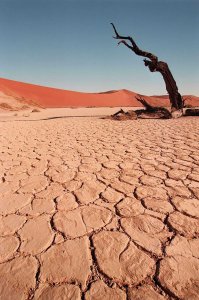 Thirst is one of the most powerful spiritual symbols in all of scripture. As dehydration draws the whole of our physical being to a longing for water, so a spiritual void will draw our spirits into a search for deeper meaning for our lives.

The Bible teaches us that the thirst that drives all other desires is a thirst for God. The Psalmist expressed it this way, I spread out my hands to You; My soul longs for You like a thirsty land. (Psalm 143:6).

Consider a character in the novel Infinite Jest by David Foster Wallace.  The lengthy and complex work takes place in a North American dystopia, centering on a junior tennis academy and a nearby substance-abuse recovery center. LaMont Chu is a tennis prodigy that is obsessed with becoming the next great professional tennis star who asks the resident guru named Lyle for help.

“Trust me,” he tells LaMont, “the pros whom you envy do not feel what you burn for. They are trapped, just as you are.”

“Is this supposed to be good news?” asks LaMont. “This is awful news.”

“LaMont, are you willing to listen to a remark about what is true? The truth will set you free. But not until it is finished with you. You have been snared by something untrue. You are deluded. But this is good news. You burn with hunger for food that does not exist.”

Why do we exhaust ourselves at work trying to climb to another level of recognition on the org chart or to another income bracket? Yet when you look closely at the people who are already there they are no more happy and content than we are.  Why is that? It’s because those desires are meant to lead beyond themselves to the God for whom we were made.

The desires under our desires, the thirsts under our thirst—is for God.

When Jesus hung on the cross and said “I thirst”,  there is more going on than physical dehydration. At this point in the brutal crucifixion Jesus had been in pain for quite some time and He had lost lots of blood before this point in the process and yet he had not expressed any bodily discomfort or pain in any way. So why now?

Augustine says that when Jesus said, “I thirst”, he was saying that He thirsted for the world to be restored to Eden.  When he hung on the cross with people cursing him, He was thirsting for you and I to be rescued and restored to what God originally intended. On the cross His mouth went dry for us so that our deep thirst could be quenched in life with God.

When Jesus said, I thirst, someone at the foot of the cross tried to do something about His thirst- they filled a sponge with sour wine, put it on hyssop, and put it to His mouth.

I think John wanted us to see ourselves in the person of this unnamed stranger. When we get close to Him we want to satisfy the deep thirst of Jesus. When we come to drink deeply of life with God, when the Living God comes to define our lives, we begin to possess something of His thirst for the world. 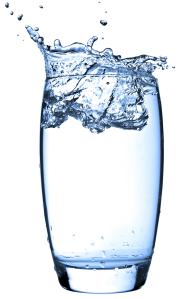 Mother Teresa had a sign placed above the entrance to the chapel in all her missions around the world. It read, “I thirst, I quench.” When we offer a cup of cold water to those in need, we are giving water to Jesus on the cross, we are quenching his thirst. When we serve others in Jesus’ name, when we are helping to quench human need, we are serving Jesus himself.

When we satisfy our deepest thirst in Jesus we begin to thirst for the things that He thirsts for—the world that he loves.

I am the beloved of the Most High God. I am an avid reader and writer and have been a continuous learner since my college studies in Ancient Literature and English. I live at the base of Mount Princeton in the Colorado Rockies with my wife of over three decades. I believe I have been put here to tell people that God is not mad at them and to show them the way Home. I am the father of three sons, three beautiful daughters-in-law and four grandchildren. I love to read, tell stories, and spend time in the wilderness.
View all posts by Joe Chambers →
This entry was posted in Uncategorized and tagged Christian maturity, grace, soul formation, thirst. Bookmark the permalink.

2 Responses to Obey Your Thirst