Then Jacob was left alone; and a Man wrestled with him until the breaking of day. Genesis 32:24

“. . . together through ages of the world we have fought the long defeat.” ~ Galadriel

Jacob is one of our ancestors in the faith who is in the fight of his life and this is a long defeat that becomes a profound transformational moment.

Jacob stood alone on the northern bank of the river: before him the roaring waters; behind him a wall of Nubian sandstone, perpendicular from its foot to the tangled black forest on its brow; right of him there was nothing except a stony, wet plateau; and left of him, nothing

Night was descending. The gorge grew gloomier, leaving only a path of sky above him, where stars filled the blackness with such tiny lights that he felt small and solitary. 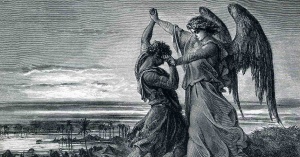 It had been Jacob’s intent to make a private crossing of the Jabbok. But maybe he trusted the swimming stroke of his strong arm better in daylight than in the dark; and maybe the nigh fell faster within the walls of the gorge than he had expected. Whatever the reason, he did not dive into the waters. He did not move. He stood transfixed, surrounded by sound and soon by an absolute darkness—for even the tiny stars were suddenly swallowed as if by a beast of horrible size.

Someone came flying down the riverbank. Jacob felt what he could not see. Then someone attacked him, struck him to the stony ground, and began to wrestle with him. They wrestled by the river. They whirled and heaved each other against the sheer rock wall. In a breathless silence, they wrestled all night until a high grey dawn began to streak the sky.

Jacob’s adversary touched the hollow of his thigh and put his thigh out of joint. Jacob threw his arms around a huge waist and held on.

Crippled and bone-tired, in that liminal space between night and day, he sees the face of his adversary. And it is fiercer than the face of death itself—he discovers that he is looking at the face of love.

Could it be that your frantic struggle for approval; for someone to know you completely and still love you; your life-long wrestle for security; your desperate ache for love—at the bottom of that is an ache for God? Could it be possible that all your life has been leading and preparing you for this moment in the darkness to see the fierce face of love—God?

But it is in the wrestling with God that we have the invitation to realize that God is all that we need. If we have Him, we have everything.

God seldom massages me into maturity and transformation.; God wrestles me into spiritual maturity.

This is how it worked with Alexander Solzhenitsyn a Russian novelist, historian, and short story writer. He was an outspoken critic of the Soviet Union and communism and helped to raise global awareness of its Gulag forced labor camp system.

He was successful and cynical in his prime as a writer until he spoke ill of Josef Stalin privately to a friend who turned him in. He spent the next decades of his life in the Gulag in Siberia. Listen to his words about his struggle…

It was only when I lay there on rotting prison straw that I sensed within myself the first stirrings of good. Gradually it was disclosed to me that the line separating good and evil passes not through states, nor between classes, nor between political parties either—but right through every human heart—and through all human hearts…. That is why I turn back to the years of my imprisonment and say, sometimes to the astonishment of those about me: “Bless you, prison!”.

This is someone whom God wrestled into transformation. His darkness and struggle forced him out of his comfort and caused him to hang on to God for dear life.

That is a magnificent defeat.