Growing deep inside Mary’s body was the Son of God.  His eyes were being formed, his dimpled little hands were growing, the lips that would speak the Sermon on the Mount and tell the story of the Prodigal Son was growing inside her.  It was happening to her!

And every time she felt her interior organs get pushed to one side, she had to remember that it was the One who would one day turn water into wine.  Every time the baby kicked she had to wonder at where those little feet would take him in the Holy Land.

I imagine there being times, as that little mother rested her hands on her swelling tummy, that she just smiled and shook her head in deep wonder.

What makes you shake your head in wonder?

Several years ago, Lynette had done a load of laundry and had several more to go. There were clothes strewn all over the laundry room floor. Right in the middle of the floor was a drain.

Our bedroom was next door to the laundry room and I was in it trying to do some reading. Suddenly I heard a shriek as if someone were being assaulted coming from the laundry room. I ran into the room and my wife had her eyes wide open, horror etched on her face and her left hand up. I said, “Hey, I am trying to read in here!” She pointed to her hand and said, “It’s gone!” I looked. Her hand was still there. Her fingers were still there. Her ring was still there. What is gone? I asked. She said, “My diamond!” 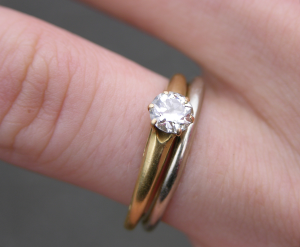 She started to cry while she ran her hand around the tub of the washer. Frantically, she started looking everywhere tossing the piles of clothes aside as if they were guilty of this thievery. I just stared at her. She snapped at me, “Why aren’t you helping me? I said, “What makes you think you are going to find it if you have been poking your hand down in a churning washing machine? All that water, soap and anything the size of that diamond is washed away. It is gone.” I wasn’t too upset about it. (I knew how much I had paid for it.)

But she was beside herself. So we looked. She tried to get me to undo some plumbing, but I balked and distracted her by looking intently down that drain into Mordor. Nothing.  After what seemed like an hour of searching I decided the practical thing to do was to get some sleep. So I went back to bed and I talked her into going to bed too.  I tried to comfort her, but she cried and cried.  I remember thinking that I don’t really understand my wife very well.

Later she told me that while in bed she whispered, “God, I know it is just a little thing. But could you help me find my diamond?”

Directly, she got up and went back to look again. I was almost asleep when I heard screaming and shouting. I bolted out of bed again thinking she had lost something else. But she came running into the bedroom, grabbed me hugged me and kissed me and said. “I found it!” Right in the middle of the laundry room floor on top of a pair of blue jeans laid her diamond.

She crawled back into bed, lay her head on my chest and through quite a few sniffles said, “Can you believe God gave that back to me?”

The next day I would watch her and from time to time she would just shake her head and smile.

Do you sometimes just marvel at the thought that God would seek you out?  If God came to you just like he came to Mary, and said “I want to be born through you. I want to use your body to bring the savior to the world.” What would you say?

Because that is exactly what he asks all of us to do.

The Christmas song, “I Wonder as I Wander” had its origins in a song fragment collected on July 16, 1933, by folklorist and singer John Jacob Niles.

While in the town of Murphy in Appalachian North Carolina, Niles attended a fundraising meeting held by evangelicals who had been ordered out-of-town by the police. In his unpublished autobiography, he wrote of hearing the song:

A girl had stepped out to the edge of the little platform attached to the automobile. She began to sing. Her clothes were unbelievable dirty and ragged, and she, too, was unwashed. Her ash-blond hair hung down in long skeins…. But, best of all, she was beautiful, and in her untutored way, she could sing. She smiled as she sang, smiled rather sadly, and sang only a single line of a song.

Niles left with “three lines of verse, and a garbled fragment of melodic material. Based on this fragment, Niles composed the version of “I Wonder as I Wander”.

And so, dear friend, may you wonder at the grace that God lives inside of someone as on’ry as you.

I am the beloved of the Most High God. I am an avid reader and writer and have been a continuous learner since my college studies in Ancient Literature and English. I live at the base of Mount Princeton in the Colorado Rockies with my wife of over three decades. I believe I have been put here to tell people that God is not mad at them and to show them the way Home. I am the father of three sons, three beautiful daughters-in-law and four grandchildren. I love to read, tell stories, and spend time in the wilderness.
View all posts by Joe Chambers →
This entry was posted in Uncategorized and tagged Christmas, joy, Mother Mary, Wonder, worship. Bookmark the permalink.

2 Responses to The Wonder