With what can we compare the kingdom of God, or what parable will we use for it?  It is like a mustard seed, which, when sown upon the ground, is the smallest of all the seeds on earth; yet when it is sown it grows up and becomes the greatest of all shrubs, and puts forth large branches, so that the birds of the air can make nests in its shade. ~ Jesus

She was not saying that she couldn’t give the thesis statement of a story. What she was saying was that the biggest things in life. The deepest truths in life cannot be tucked into a neat and tidy definition. One bullet point, one sentence will never impact the imagination and access the deeper parts of the soul like a story.

Jesus said that the Kingdom of God is so important that it cannot be reduced to a simple definition.

Why? Because God’s presence, as it were, was like the soil every created thing had to be planted into if we’re ever going to blossom.

But we human beings wanted to be our own lords and saviors and we got exactly what we wanted. We assumed control of our destinies and thus the presence of God was removed. And Heaven became remote from earth.

So, we live in a broken world. Because when our relationship with God unraveled all relationships unraveled. In some ways, we are like fish flopping and gasping in shallow puddles, able to get enough oxygen to stay alive, but are not able to swim in the blue ocean for which we were designed.

We were not built to live for anything other than God. And yet we turn away from Him and live for our job, our family, recreation, beauty and our causes; and they are all puddles compared to the Pacific Ocean. They are all too small for our souls.

And the world is broken.

The Kingdom of God is the re-introduction of the presence of God into this world in order to turn this world into the home that our hearts most desperately want. A life that is cleansed of disease and decay, and death and brokenness of any kind.

A world that becomes a place where the deepest longings of your body and soul become satiated. A garden again. That is the Kingdom of God.

Jesus says, “I am bringing that.” As John Ortberg has said, “The Kingdom of God is bringing Up There down Here.”

God’s salvation is not only about making me happy, forgiving my sins, giving me strength during difficult circumstances and punching my ticket for heaven.

When you get to the end of the Bible, in the Book of Revelation, you do not see us as individuals escaping this world into heaven; you see heaven coming down and renewing this world. Because the purpose of God’s salvation is to restore this creation. It is not just to heal your alienation with God but also to heal all alienations that arose from the loss of God’s presence on this earth.

His salvation is not just to save souls it also includes righting social injustices. We are to be about trying to save souls…but also to feed the poor…to seek racial reconciliation, and to work towards justice for the voiceless.

But if He is the King of the Universe you can’t come to Him negotiating what you will do or won’t do. How do you come to a King? You bow, you kneel, and you offer your sword, hilt toward Him, blade toward you.

Why? Because when you offer your sword to a King hilt towards Him and blade towards you, you are saying, “I am now radically vulnerable to you and I trust you not to abuse what I am giving you.”

If you will not trust Him that much you are not treating Him as a King. Is He King of the Universe? Then we can’t negotiate the terms of our relationship! 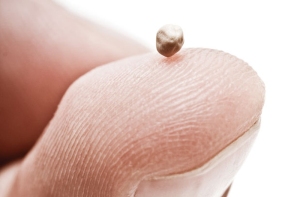 He came down to a womb; to a manger; to a peasant family; in a no where town; in a no name nation to reclaim, redeem, and restore His creation.