Thy kingdom come, Thy will be done in earth, as it is in heaven.~ Jesus 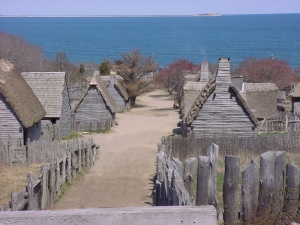 Lynette and I were visiting the Plymouth Plantation in Massachusetts a few years ago and had an interesting encounter with one of the actors that was participating in the interpretive museum.  He was in one of the replica thatched-roofed huts and as we passed by we could hear him reading scripture.  We walked into “his” house and listened to him read from the book of Ecclesiastes.

After a few minutes I asked him a question or two like, “What was the weather like and how was the voyage over on the Mayflower?”  The actor speaking in a brogue accent stayed in character the entire conversation.  He was portraying one of the actual pilgrims that had made that arduous trip.  I was curious as to what “Isaac’s” trade in the New World was so I asked the following question:

“Isaac, what is your profession?” 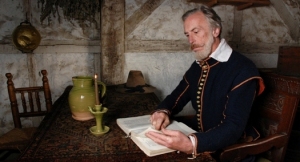 And, with the 1611 version of the King James Bible open on his lap, he looked at me with incredulity and said,

I smiled at the depth of understanding of this actor and asked a second time what his trade was and he said that he was a tailor.

The difference between our job and our profession can be confusing for many of us.

If you name Jesus as your Lord, you have a higher calling than your trade.  All who are born from above have been beseeched to walk worthy of the calling with which we were called.  We have all been called to be foot soldiers in the advancement of the Kingdom of Heaven.  So, whether you work as a teacher, and engineer, brick layer or a preacher we are all called to be Kingdom-bringers to this sorry, dark world.

A job is an avocation and it exists only to provide a means to advance my vocation.  In other words, I have a calling. And that calling, my friends, is to bring “up there down here.”

That is my profession.

I am the beloved of the Most High God. I am an avid reader and writer and have been a continuous learner since my college studies in Ancient Literature and English. I live at the base of Mount Princeton in the Colorado Rockies with my wife of over three decades. I believe I have been put here to tell people that God is not mad at them and to show them the way Home. I am the father of three sons, three beautiful daughters-in-law and four grandchildren. I love to read, tell stories, and spend time in the wilderness.
View all posts by Joe Chambers →
This entry was posted in Uncategorized and tagged Calling, Christian Life, Job, Plymouth Plantation, profession, work. Bookmark the permalink.