Forgiveness is not for Wimps

So David and his men went on the road, while Shimei went along on the hillside opposite him and cursed as he went, throwing stones and flinging dust at him. (2 Samuel 16:13)

Leonard Cohen, the legendary 82-year-old Canadian poet and singer who died last year, is well-known for a set of powerful lyrics from his song “Anthem,” off the 1992 album The Future.

In dark times, poetry and music often become more important to us, providing the kind of transcendence we need to interpret painful events in a wider context. And Cohen wrote “Anthem,” one of his most beautiful and hopeful songs, in a tumultuous global period.

Ring the bells that still can ring
Forget your perfect offering
There is a crack, a crack in everything
That’s how the light gets in.

Those lines come to life in this moment in David’s life—there are cracks everywhere. He has used his power to bring about great harm against other people. He has started a cycle of violence in his own family. And here he is experiencing the consequences of it.

Everything is cracking up in David’s life.

David’s affair with Bathsheba had set off a whole chain of tragic events: his infant son died, his family was in turmoil, he lost his throne to his rebellious son Absalom. Stripped of his dignity and political power, David had reached the lowest level of his life.

David approached a little village, nestled on the eastern slope of the Mount of Olives just 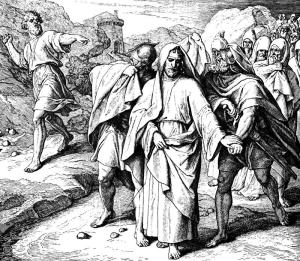 outside of Jerusalem, when someone from the other side of the valley begins to call and curse his name.

Shimei is from the house of Saul, David’s immediate predecessor. So, it is safe to assume that Shimei is an extended member of Saul’s family. There is a good chance that this is someone who has been nursing a deep, seething hatred against David for decades. Alexander Whyte calls him “a reptile of the royal house of Saul.”

Shemei has come at David at a hard moment. David has done nothing to warrant these public assaults. But they come, nevertheless. David now has a choice. He can be offended and become resentful and take revenge on this man—or not.

If you think about it, this is the world in which we live as well. Whether that is in our personal families, national politics, or the local church—cursing, throwing rocks, flinging dust and drawing swords. How do we break free from this downward cycle?

David says,  Let him alone, and let him curse…It may be that the Lord will look on my distress, and the Lord will repay me with good for this cursing of me today.”

David forgives him even though Shemei doesn’t ask for it and has not stopped his malicious behavior.

How is that David’s soul is spacious enough to give away that kind of unasked for mercy?Because David is aware of the cracks in his own soul. He has seen all the warped and twisted parts of him exposed. He knows his own guilt.

And, more importantly, he’s experienced God’s Mount-Princeton-size-grace. Remember when his pastor, Nathan, confronted him about his affair and coverup with Bathsheba? David did not go into spin mode. He didn’t try to explain away his sin.

David can express loyal love, even when it is not reciprocated, because David had experienced that loyal love from the God of the universe.

He would endure sneering, taunting, and torturing soldiers. He would endure mocking bystanders watching him stripped naked and executed as if it were an afternoon matinee. Jesus would go to these depths for God in order to offer unasked-for forgiveness to us.

The good news of Jesus is that because he walked this same road as David, it changes everything about the world and how we relate to each other—forever. Because people who have tasted of God’s scandalous forgiveness, drink it in and metabolize it into their souls—it shows up in their life as daring and scandalous forgiveness towards others.

The same door in our hearts that lets God’s forgiveness into our souls is the door that allows grace to escape and embrace others. If we keep the doors locked, it stops the flow of forgiveness—both ways.

I must always remember that deep and thorough forgiveness is a journey; not a moment.

The Bible talks about forgiveness as a new vision and a new feeling towards the person who harmed us.

When you forgive that person, you may be the only person healed. The other person may be hostile or apathetic about your pain. So, when you forgive, you must often be content with editing your own memory. It’s something you do inside your own mind.

I love what Lewis Smedes says about forgiveness,

You will know that forgiveness has begun when you recall those who hurt you and feel the power to wish them well.

So, my friends, remember that the light of Christ has entered through the cracks of your soul and that is how it escapes into this dark world.

I am the beloved of the Most High God. I am an avid reader and writer and have been a continuous learner since my college studies in Ancient Literature and English. I live at the base of Mount Princeton in the Colorado Rockies with my wife of over three decades. I believe I have been put here to tell people that God is not mad at them and to show them the way Home. I am the father of three sons, three beautiful daughters-in-law and four grandchildren. I love to read, tell stories, and spend time in the wilderness.
View all posts by Joe Chambers →
This entry was posted in Uncategorized and tagged Christian maturity, Forgiveness, grace, healing, King David, Mercy, Shemei. Bookmark the permalink.

3 Responses to Forgiveness is not for Wimps