Everyone has a family member that is hard to love. If you don’t know who that particularly challenging-to-love person is, chances are it is you. It is quite sobering to imagine that I am someone’s hard to love person. In our family that person was my maternal grandfather.

He was a grumpy old cowboy from west Texas. He only had an 8th grade education and, for a few years when my mother was a little girl, he was a Baptist preacher. Then he decided that making money was more important than winning souls so he went back to combining wheat up and down the Midwest from Texas to Canada.

He was an old man when I was born and much older than his years. His teeth were worn down to the gums on both sides of his mouth from clamping down on a pipe stem for so many years. He never brushed his teeth and only took a bath once a week. To this day there are three smells that make my head spin: Vitalis hair tonic, Prince Albert tobacco smoke, and Ben-Gay. And that’s all I want to say about that.

He was a complicated man and a walking contradiction, my grandfather. He would give the shirt off his back to a complete stranger, but was hesitant to buy new clothes for his own children.

As family stories go I’ve told this one so many times and it happened so long ago that I can’t remember if it happened to me or my brother or to both of us.

One day I was riding with him in his old 1959 blue ¾ ton Chevrolet pickup up a rough old mountain road in northern New Mexico. He cleared his throat, took the pipe out of his mouth, and began to sing an old hymn:

What a friend we have in Jesus,

All our sins and griefs to bear!

What a privilege to carry

Everything to God in prayer!

About this time in the hymn, suddenly and without warning we hit a huge pothole in the road that bounced us so hard we both hit our heads on the roof of the cab of the pickup. That’s when my grandfather yelled, “God damn these roads!”

Then he went back to singing…

Have we trials and temptations?

Is there trouble anywhere?

We should never be discouraged—

Take it to the Lord in prayer.

I was stunned. I never understood, at such a formative stage in my life, how two disparate things could come out of the same mouth—curses and praises. He was as deeply flawed a man as I have ever known, but you know what? He loved Jesus and he loved me and that meant I loved him too.

One day a group of people came to Jesus dragging a disheveled woman who had been caught in adultery. They threw her at his feet. Each held a stone for the punishment of such a crime was death by stoning. Interesting, they only brought the woman. This leads me to believe the woman had been framed.

In John Chapter 8, they said, Teacher, [. . .] What shall we do with her? (vs 4-5) They didn’t care about this woman. She was just a pawn in their game to try to trap Jesus. They knew the Law. They had a lot of truth, but not much grace. 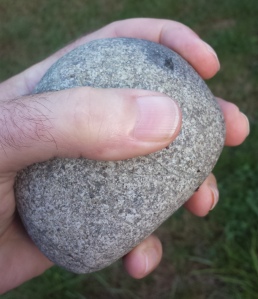 Sometimes stones feel good in our hands. They fit like a well-worn tool. Do you ever have a stone in your hand: a judgmental attitude or self-righteous thoughts?

Why do churches produce so many stone throwers? They don’t dance. They don’t laugh. They don’t have much capacity for joy. But there is one thing they do enjoy—passing judgment on other people they regard as spiritually inferior.

The truth is that gathering stones energizes them in a way. They almost look forward to it. It kind of makes them feel good. I know what that feels like. Maybe you do too. But the only people attracted to a club of stone-throwers are other stone throwers. And God forbid you mess up because you don’t want to be around when the rocks start flying.

So Jesus said to all the people who had gathered around Him, Let the one who is without sin cast the first stone. And they all walked away. Then He turned to the woman and said, ‘Does no one here condemn you?  . . . Then neither do I.’ (vs. 7,10-11)

That’s grace—no condemnation from Jesus. But then, He said one more thing to her. He said to her, Now go and sin no more. (v. 11) That’s truth.

Preaching to an African-American church is very different from preaching in my church because they give you feedback the whole time. If you’re doing well, they give you grace. They say, “Preach it! Keep going! Tell it!”

If it’s not going very well, they give you truth by yelling, “Help him, Jesus!”

What a great thing it would be if as a Christian community we could flood folks with grace and truth. When people are doing well, we’d let them know and cheer them on, “Go on! Tell it! Do it!”

We are all walking contradictions and God knew just what we needed. The Apostle John wrote in John 1:14, And the Word became flesh and dwelt among us, and we beheld His glory, the glory as of the only begotten of the Father, full of grace and truth.

There will always be holes in the road of life that bring out the worst in us. We need grace and truth from the family of faith. But when we can’t find it there or their hands hold only stones, we can always go to Jesus.

Can we find a friend so faithful,

Jesus knows our every weakness;

Take it to the Lord in prayer.

His hands are open and the only thing he carries in them are scars.

I am the beloved of the Most High God. I am an avid reader and writer and have been a continuous learner since my college studies in Ancient Literature and English. I live at the base of Mount Princeton in the Colorado Rockies with my wife of over three decades. I believe I have been put here to tell people that God is not mad at them and to show them the way Home. I am the father of three sons, three beautiful daughters-in-law and four grandchildren. I love to read, tell stories, and spend time in the wilderness.
View all posts by Joe Chambers →
This entry was posted in Uncategorized and tagged extra grace required, grace, Love, spiritual formation, truth. Bookmark the permalink.