Life at the Speed of Your Father

When pride comes, then comes shame;
But with the humble is wisdom. Proverbs 11:2

“Oh Lord, it’s hard to be humble when you’re perfect in every way.” Mac Davis

I went backpacking with my eighty-year-old father and twenty-six-year old son recently and it might not surprise you to know they both walked at a different pace. Being sixty-years-old, my pace is somewhere between them. We had a good time enjoying the wilderness of Colorado and the mountains we love.

At one point my dad wondered aloud why Christians can look at what our current president says and does and see him so differently. I wonder the same thing. We talked about it for several hours beside Sand Creek in the Sangre De Cristo mountains.

Full disclosure: My dad voted for and, to a large extent, supports the current president. I did not vote for him and do not support virtually anything the president stands for.

Our conversation ranged far and wide to all the sensitive social issues: Abortion, same-sex marriage, immigration reform, religious liberty, etc. On virtually all of those issues my dad and I are in agreement, but when it comes to supporting the President we differ greatly.

After our long and amicable conversation, I went for a solo hike up to Lower Sand Lake. I asked God to help me understand how two men who love Him so much and agree about most things theologically and politically could be at such odds on this. I’m not sure He gave me a very definitive answer.

But what did occur to me is that some people support their guy because he is their guy. They are loyal, if nothing else. That reminded me of a professional football player from the 90’s named Bill Romanowski. He played for the San Francisco 49er’s and the Denver Broncos. ESPN named him the fifth dirtiest player in the history of the NFL. When he played for the other teams I hated him. He was dirty. In my mind, every tackle there was a flagrant foul and unnecessary roughness. He should have been penalized on every play.

Then he came to the Broncos (my all-time favorite team) and for several years in the late 90’s Bill Romanowski helped us win. We even won back-to-back Super Bowls. It’s funny, I didn’t see him as such a dirty player during those years. He was helping us get what we all wanted. A world championship.

But then he went to play for the hated Oakland Raiders. Now he was the devil incarnate again.

Honestly, I think many see the current president the way I viewed Bill Romanowski. As long as he helps us win at the political game, we can overlook his antics, but those on the “other team” look at him with disgust and contempt.

On the hike down from the lake I wondered what singular character trait Christians should admire in a leader and immediately I thought of humility. It doesn’t mean we agree with everything he or she stands for, but shouldn’t Christians admire leaders who display some modicum of humility?

By the way, the humblest man I know is my father. I remember him saying many times growing up in his home that the sign of a maturing Christian is that they display a “teachable spirit.” I find it difficult to believe that a leader with a teachable spirit would not be humble. That is the kind of leader I want to be anyway.

Isn’t humility indispensable to the life of a Christian and shouldn’t it be our most important value in a leader? This is true in business, church life, and politics. How can you embrace in your heart a pastor who is narcissistic? How can a Christian who follows Jesus so closely that the dust from his sandals is on their clothing at the same time embrace a leader who is filled with hubris?

I completely agree. As has been my practice for decades, I will pray for the leaders who do not display integrity and humility, but I will give my allegiance to those who display at least a hint of humility.

This week my dad had a procedure done to his heart that, hopefully, will help the bottom chamber and the top chamber stop beating out of sync. Right now, he can’t walk very far on a trail without his heart racing out of control and causing him to be light-headed and short of breath. 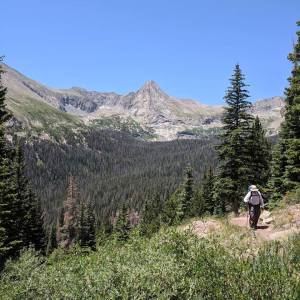 On our hike to Sand Creek I never walked with my son. His pace was too fast for me, but I told my dad on Father’s Day this year that I wanted to go backpacking with him. Frequently, between breaths, Dad would say things like, “Son, you don’t have to wait on me. Go on ahead.” But I didn’t come into the wilderness with him to hike by myself. I came in the wilderness to be with him.

If I want to walk with my father, I have to go at his pace.

There are a lot of layers of meaning to that last line. What is true of my dad is true of my Heavenly Father, too, but we will save that for another time.

But now is the time to walk with my father, no matter who he voted for.

I am the beloved of the Most High God. I am an avid reader and writer and have been a continuous learner since my college studies in Ancient Literature and English. I live at the base of Mount Princeton in the Colorado Rockies with my wife of over three decades. I believe I have been put here to tell people that God is not mad at them and to show them the way Home. I am the father of three sons, three beautiful daughters-in-law and four grandchildren. I love to read, tell stories, and spend time in the wilderness.
View all posts by Joe Chambers →
This entry was posted in Uncategorized. Bookmark the permalink.
John Blase