My brother used  to let me stuff him into a hideaway couch and put the cushions on it. I’d sit on the couch and then invite my little sisters to come in for a conversation. I’d make an excuse to leave the room and they would stay seated on the couch. At some point my brother would begin to make noises and movements from inside the couch. It was quite fun to see how high my little sisters could levitate in fear.

He tried to fold me up in the couch but I couldn’t let it happen due to the following story:

One time he and I were playing hide and go seek with those sisters again and I got in the trunk of my mom’s car. My brother had the key, so I knew all would be well. I won the game. The slow-witted sisters never thought to look in a locked trunk.

Came time to get out and begin a new game so my brother inserted the key and turned it the wrong way and the trunk wouldn’t open. I began to threaten him from inside the trunk of the Chrysler and that’s when he panicked and twisted the key too far the wrong way and broke it off inside the lock. When he told me that, all manner of hell broke loose inside that trunk. I screamed. I kicked. I cried. I grabbed the tire iron and began to beat on the trunk as if that would release the lock. It looked like a mechanical octopus tried to escape the locked trunk.

Finally, my brother stuck the key back in and it married up with the broken tip inside the lock and he turned it the right way and the trunk popped open. I was so relieved to be out that I hugged my captor.

Not sure how we explained the trunk lid to my parents. 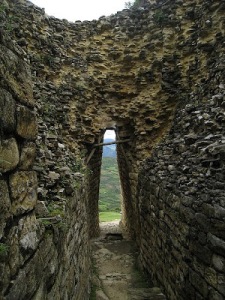 One time Jesus said, “Enter through the narrow gate…For the gate is narrow and the road is hard that leads to life, and there are few who find it. (Matt. 7:13,14)

That sounds awfully claustrophobic to me, does it to you?

Sometimes we still use the term he was in dire straits. What does that mean?

Jesus is depicting something that looks like it’s going to crush you or smother you to death. These words mean death, and life means spaciousness. You need air. You need room to breathe, to move about.

He brought me out into a spacious place;
he rescued me because he delighted in me.

And yet Jesus says there is this tiny little narrow gate that looks like it’s going to kill you and smother you, but on the other side of it is spaciousness and life, forests and lakes and trees and mountains tipped with snow.

I’ve found that sometimes we Christ-followers can lose our soul-spaciousness. For me, I can always tell I’m losing my spaciousness by how easily I fall prey to looking down on anyone who is living a life I find pitiful. But when I remember how much I have been graced by the generosity of God, I tend to find myself being generous with those in my world who are challenging.

I lose my spaciousness not so much because of sin, but because I forget the gospel.

There is a place in C.S. Lewis’ last of the Narnia chronicles The Last Battle, that describes a scene where the good King Tirian is in a terrible battle, and there’s a tiny stable on a hill.

He has to go in there, and he has reasons to think he’s going to die when he does. Here is how Lewis tells it,

He looked round again and could hardly believe his eyes. There was blue sky overhead, and grassy country spreading as far as he could see in every direction, and his new friends all round him.

“Yes,” said Lord Digory. “It’s inside is bigger than its outside.”

The Jesus-life is bigger on the inside than it looks on the outside. Because in some ways, you leave your old identity behind and give up the right to live the way you want. And as a result, there will be people who will always consider you narrow. Are you ready to go down there?

Here’s what will help you do it.

Jessica McClure was born March 26, 1986 and became famous on October 14, 1987, at the age of 18 months after she fell into a well in her aunt’s backyard in Midland, Texas. Between that day and October 16, rescuers worked for 56 hours to free her from the eight-inch well casing 22 feet below the ground.

It just gives you the chills to even think about it.

That was nothing like the pipe Jesus went down. How big was Jesus? Infinite in size, and he became a human being. How glorious and free was Jesus? Yet He went to the cross. The infinite-sized Jesus was crushed.  Why did he do that? To know the spaciousness of a resurrection and a new heavens and a new earth with you and me in it.

Jesus is calling everyone to a narrowness that leads to spiritual spaciousness—and life.

That is the key that will set you free.

I am the beloved of the Most High God. I am an avid reader and writer and have been a continuous learner since my college studies in Ancient Literature and English. I live at the base of Mount Princeton in the Colorado Rockies with my wife of over three decades. I believe I have been put here to tell people that God is not mad at them and to show them the way Home. I am the father of three sons, three beautiful daughters-in-law and four grandchildren. I love to read, tell stories, and spend time in the wilderness.
View all posts by Joe Chambers →
This entry was posted in Uncategorized and tagged Christian, faith, Gospel, grace, peace, salvation. Bookmark the permalink.