While Peter was kept in prison, the church prayed fervently to God for him. Acts 12:5

I wonder if you really believe that you have the ear of the God of the universe when you talk to him. Does God listen to you?

There is a crazy story about the apostle Peter in Acts 12 where Peter is in prison and the fledgling church is praying for his release. God sends an angel to facilitate the prison break and Peter is set free, avoiding almost certain execution. 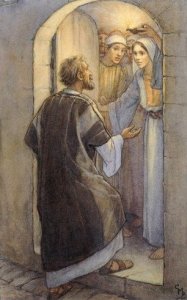 After leaving the prison, Peter looks this way and that way and then runs to the house of Mary where he knows the Christian community has gathered and are praying for his miraculous release. When he gets to Mary’s house, he bangs for dear life on the door. A maid named Rhoda answers the door and when she figures out that it is Peter, she’s so overjoyed that she leaves him outside in the cold and runs to tell the people in the prayer meeting that Peter is outside.

After hearing her breathless announcement about Peter, what do they do? They shshsh her and say, “You are crazy!”

The knocking is persistent and getting louder from the big fishermen, and they say out loud, “It must be Peter’s angel.” In other words, they thought he had already been executed and this was his ghost coming to pay them a visit.

The pounding on the door makes them think that the ghost is having trouble with the latch, so they come to the door and find Peter standing there in the flesh. He comes in, quiets everyone down, tells his story, and then he makes himself scarce before the sun comes up.

Think about the absurdity of this scene. Peter doesn’t believe what God is doing until he finds himself standing on a strange road. He shows up at the house where people have been praying for him and they think at best it is Peter’s ghost and are shocked to see that is really Peter himself.

Not a lot of high-caliber faith going on here, is there?

But this story vividly shows us God responds to fervent prayer, even if that fervent prayer is only half-hearted…because they are all shocked when the prayer is dramatically answered.

Half-hearted fervent prayer will move the hand of God. Why? Because most of the time that is all He has to work with.

The story begs the question of whether or not we really believe we have the ear of the God who rules everything. The Peter story dares us to believe that there is nothing that almighty God cannot do. And that he listens to people who pray to him in Jesus name and for Jesus sake about things that he cares about.

So, I want to invite you to take the temperature of your own life. Do you pray as if God could or would actually do anything?

Four years ago, I learned that a little church in the mountains of Colorado was looking for a pastor. I looked into it and learned all I could about that little church. I flew out here and took a tour of the facility. After that tour and meeting with the Search Committee, Lynette and I were driving down to Poncha Springs where we were staying with my Dad and I remember praying, “I sure would love to pastor that Church, God.”

The next day they unanimously voted to have me be their pastor. And I couldn’t believe it!  I was shocked. I prayed a fervent half-hearted prayer—and God said, “Yes”!

Do you approach God as if you have the ear of the God of the universe? That’s the question this story of this divine escape asks us.

The psalmist reminds us, The eyes of the Lord are upon the righteous, and his ears are open unto their cry. (Psalm 34:15)

God is listening to you. Never forget that.

I am the beloved of the Most High God. I am an avid reader and writer and have been a continuous learner since my college studies in Ancient Literature and English. I live at the base of Mount Princeton in the Colorado Rockies with my wife of over three decades. I believe I have been put here to tell people that God is not mad at them and to show them the way Home. I am the father of three sons, three beautiful daughters-in-law and four grandchildren. I love to read, tell stories, and spend time in the wilderness.
View all posts by Joe Chambers →
This entry was posted in Uncategorized and tagged faith, grace, Prayer, soul formation. Bookmark the permalink.