When I was a boy and we lived in the mountains of Colorado, my dad built a home 9 miles outside of town. My mom wanted a yard with grass, so they hauled in rich, black topsoil and dumped in front and back of the house.

One summer my dad left clear instructions for my brother and me to spread that dirt so that he could plant grass seed and mom could have a green yard. Then both my mom and dad went to work in town.

Since the primordial days of Adam and Eve, mankind has failed to steward the good earth and haven’t done a bloody thing to care for creation. In fact, due to the sin they brought into the world, the entire creation was coming unraveled at the seams.

In fact, it is an axiom of Kingdom-life: Where ever you see chaos, God is absent.

For God is not the author of confusion but of peace.

And, less we Christians become too smug, our faith teaches us that even when we are most sure that we’re right about something, we’re never free from mixed motives.
The religious right and the religious left are absolutely convinced that they are 100% right about all issues. And when you are 100% convinced about anything, you stop listening. And when you stop listening, those with whom you disagree become your enemy. And the creation of enemies begets violence—in either word or deed.

That is corruption. That is chaos. That is anti-God.

All of us could use a big dose of self-honesty. Self-honesty is catching yourself lying to yourself.

I like the way Alexander Solzhenitsyn describes the heart of humanity,

If only it were all so simple! If only there were evil people somewhere insidiously committing evil deeds, and it were necessary only to separate them from the rest of us and destroy them. But the line dividing good and evil cuts through the heart of every human being. And who is willing to destroy a piece of his own heart?

The worst person you can think of was created as an image-bearer.

You see it depicted in literature and film all the time. It happens in the Infinity Wars when you get the sense that Thanos is conflicted about destroying virtually everyone in the universe. You see it happen in Star Wars when the villain Kylo Ren seems to be deeply conflicted by the idea of killing his father, Han Solo. 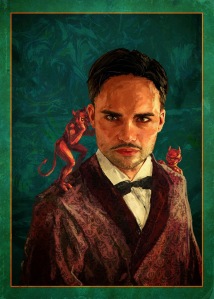 In Christopher Marlowe’s Doctor Faustus. Faustus has an ambitious nature. Despite being a respected scholar, he sold his soul to Lucifer by signing a contract with his blood, in order to achieve ultimate power and limitless pleasure in this world. He learns the art of black magic and defies Christianity.

After he sells his soul to the Devil, Faustus suffering from an internal conflict where he thinks honestly about repenting, acting upon the advice of “the good angel,” but “the bad angel” or the evil inside him distracts him by saying it is all too late.

Eventually, the resolution comes when demons take his soul away to Hell, and he suffers eternal damnation because of his over-ambition.

I went to a church growth conference 25 years ago and the speaker said that we pastors should never let our worship leaders lead the congregation in songs that are written in a minor key. The worship service should always be happy, high-energy, upbeat and happy, happy, happy.

There is a very descriptive Hebrew word for that kind of thinking, “Bullbutter!”

I have enjoyed a song called recently, O the deep, deep love of Jesus! It is written in a minor key. Why? Because life is not always happy, happy, happy Mr. Church-Growth-Guru-Guy.

O the deep, deep love of Jesus!
Vast, unmeasured, boundless, free;
rolling as a mighty ocean
in its fullness over me.
Underneath me, all around me,
is the current of thy love;
leading onward, leading homeward,
to thy glorious rest above.

And so, my friend, may you remember that no matter how big a mess you see on the news and in the mirror, the love of Jesus demonstrated on the cross is vast, unmeasured, boundless and free.