And be kind to one another, tenderhearted, forgiving one another, even as God in Christ forgave you. – Saint Paul

Every congregation is a congregation of sinners. As if that weren’t bad enough, they all have sinners for pastors. – Eugene Peterson

I know of a church that parted ways with her pastor in ways that left both pastor and people wounded. The pastor remained in the small town and continued to raise his family there. The church members would see him or his wife in the only grocery store and the meeting was polite but awkward. 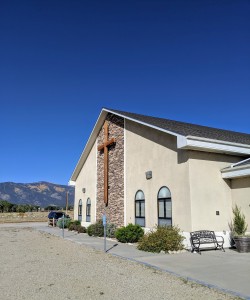 Perhaps leadership mistakes were made by the pastor, but his doctrine and integrity were beyond reproach. Yet it seemed that the pastor and people were not a good fit.

A lot of divorces could be avoided if the marriage had never happened in the first place.

A group in the church decided it was time to make a change and through a series of meetings the die was cast. Before the young pastor was fired at a business meeting, he resigned. Technically, the church didn’t fire him, but the result was the same.

A few weeks ago, the Church invited the former pastor back for a meal to celebrate his ministry at the Church. At first, both people and the pastor were a little reluctant about the encounter. However, the evening was a beautiful expression of what it means when Paul said, If it is possible, so far as it depends on you, live peaceably with all.

What do you do when you want to bring a group of people and a former pastor together? Everyone gathered in a huge circle in the fellowship hall and held hands. A gentle prayer requesting grace to be our balm was whispered. Each person was invited to come to the pastor and his family and tell them how much they loved them.

During the quiet moments of that night, you could almost hear the soft sound of sandaled feet walking among the pastor and people.

Later the pastor’s wife said this:

Thank you for tonight! When I walked into the fellowship hall, I felt the grace you prayed about. I felt love. I felt peace. I felt at home.

I am the beloved of the Most High God. I am an avid reader and writer and have been a continuous learner since my college studies in Ancient Literature and English. I live at the base of Mount Princeton in the Colorado Rockies with my wife of over three decades. I believe I have been put here to tell people that God is not mad at them and to show them the way Home. I am the father of three sons, three beautiful daughters-in-law and four grandchildren. I love to read, tell stories, and spend time in the wilderness.
View all posts by Joe Chambers →
This entry was posted in Uncategorized and tagged Church, Leadership, pastor, Pastor's Wife, Restoration. Bookmark the permalink.