The soldiers stretch His arms across the coarse-grained wood. A soldier straddles His chest. Two others straddle His arms. Two others, His legs. They expect a struggle. No struggle comes.

The spiker bends on one knee, the pockets of his leather apron bulging with nails, an iron-headed mallet filling his hand. He places the spike just below Jesus’ wrist. The clank of metal echoes off the stone walls. One sharp rap to penetrate the arm. One more to penetrate the wood. One rap on the other arm. Then another. And the job is done.

Four soldiers lift Jesus’ crossbeam and two steady His feet. Two others hoist it with ropes that run through a groove in the upright timber.  The spikes scrape against the bones in His wrists, and the shifting weight of His body tears the skin and muscles in His arms. But He does not cry out.

A soldier on a ladder steadies the crossbeam into the notch of the upright. As the beams are jostled into position, they rasp the open wounds on Jesus’ back. The pain is excruciating, but the only anesthetic is the gritting of His teeth. 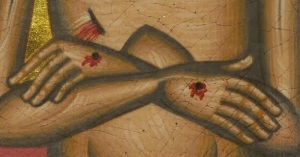 The bored holes in each beam are aligned, and a peg is driven through both to join the timbers. Once the crossbeam is secure, Christ’s right leg is pulled over the left, and the spiker drives a single nail through both feet.

Six hours later, Jesus was dead. To make sure, a soldier takes the point of a spear and counts His ribs.  Between the fifth and sixth rib, he positions the point. With a short thrust, he punctures Jesus’ heart.  A confluence of blood and water streams from the wound.

WHAT CAUSED THE WOUNDS?

Jesus was the fairest of ten thousand, the Bright and Morning Star, the song says.

Pilate said three times, “I find no fault in this man.”

What kind of sin would do that to Jesus?

Two kinds:  yours and mine.

Think about who stood around that cross.

It reminds me of that old spiritual,

Just like the prophet said hundreds of years before Jesus was hung on that cross:

He was wounded for our transgressions, He was bruised for our iniquities; the chastisement for our peace was upon Him, and by His stripes we are healed.

And as John would record for us these words from the lips of Jesus himself, Greater love has no one than this, than to lay down one’s life for his friends.

Amazing love that would not change, no matter what happened!

DEATH DIDN’T GIVE UP WITHOUT A FIGHT!

From the moment the angels sang, ” ‘Glory to God in the highest, and on earth peace, goodwill toward men!’ “  Satan dogged Jesus’ trail all the way to Calvary and stood at the foot of the cross. There he lied, he ridiculed, he falsely accused–he used rejection, he used betrayal and denial…everything to seduce Jesus to abandon God’s plan. It wouldn’t work.

The demons of hate, jealousy, envy, pride, and self-centeredness got together and said, “We’ll put Him on a cross and let Death have Him.”  I imagine Death on that hill, waiting to get its wraithlike hands on Jesus.  Every time Jesus would speak, Death would reach for Him.

Then Jesus said, “It is finished!”  Death now embraces Him, and Jesus says His last words: “Father, into Your hands I commit my Spirit.”

There on that hill, as the sky grows dark, death takes the body and puts it in a tomb–keeping it there all Friday night…Saturday and Saturday night.

THAT KIND OF LOVE DEMANDS SOMETHING FROM ME

One day a little girl was combing her mother’s hair leaned over and said, Momma, you know I love you don’t you?  The mother said, “Yes, I know.”

There was a long moment of silence.

The mother reached around and caught her little daughter’s hands and pulled her around, picked her up and set her on her lap.  And said, “Mary, I’ve got something to tell you; maybe I should have told you this before now.

“Mary, there was a mother who had prayed to God to give her a baby girl. And the Lord answered her prayers. She loved sewing, knitting, and making clothes for her daughter.

“One day while this mother was ironing clothes, she remembered that she needed something from the drug store just down the street. She looked at her daughter asleep in the crib and thought, ‘I’ll ease off to the drug store and get these articles and get back before her nap is over.’

“So, she set her iron down on the ironing board, put her shawl around her shoulders and stepped out into the afternoon sun. She got the things she needed and was making her way back home when a fire truck passed her with its lights flashing and siren blaring. It was a common sound in her part of the city. But when she got to the corner and looked; the fire truck was parked in front of her apartment. And the ladder was reaching up to the third floor—her floor. And smoke was coming out of her window.

“And suddenly, she remembered that when she was ironing and had decided to go to the drug store, she had left the iron turned on. And it was her apartment that was on fire and that her little girl was in there!

“She began to run, and the firemen pulled at her to try to stop her, but she pulled out of her coat and ran up the stairs and opened the door to her apartment. And as she moved across the floor she looked and flames were reaching out to embrace the baby, so she raced over to the crib grabbed her little girl, pulled the baby to her bosom just as the flames of fire were reaching for the little girl, but the fire burned the mother’s hands.

“And, Mary, I want you to know the little girl was you.”

When you look at the wounds of Jesus you remember,

He was wounded for our transgressions, He was bruised for our iniquities; the chastisement for our peace was upon Him, and by His stripes we are healed.”

I don’t know about you, but I love Him.