Lynette: They would close by themselves and not bang with they shut.

Me: But how will I know when you are upset with me if they don’t bang when you shut them?

We have special names like this for each other. I call her “Babyface” and she calls me “Idiot.” She often says to me when I tell a story of her calling me “Idiot” that she doesn’t actually call me that very often. I say, “You say it with their eyes. You say it with your eyes.” That’s when she usually says, “You are an idiot.”

In close relationships, people often give each other private names. It’s a way of saying, “I have a special connection with you. You are special.”

In the last book of the Bible, Jesus promises To the one who is victorious (keeps putting one spiritual foot in front of the other) I will…give that person a white stone with a new name written on it, known only to the one who receives it. (Revelation 2:17)

What will that name be? Unlike the secret name that Lynette has for me, Jesus’ name of endearment for me and you is a secret. I don’t know what yours will be, but I believe that when we hear it we will instantly know a closeness with the One who spoke these words that will surpass all other moments of intimacy we have ever know by ten million.

Let me tell you a story…

As we climbed the 13,200-foot pass, so we could drop into the Deadman basin, I could see that dad was slowing down. His knee had been giving him plenty of trouble. It was before his knee replacement and he was climbing with bone on bone in his right knee. Understandably, he was the last up to the top of the pass. As we sat in that high alpine saddle above timberline waiting for him one of my sons said, “Dad, grandpa is tough. Are you going to be able to climb up here like he is doing when you are 65?”

No. I said, “Yeah, he is setting the bar pretty high for me.” 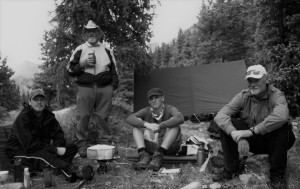 After a week of catching the best cutthroat trout in the state, we started planning our trek out. Dad’s knee never recovered like he had hoped and the thought of climbing out the same way we came in was out of the question. The trouble was we had never come out of Deadman any other way. We got the topographical maps out and he and I began looking at other possible routes.

We settled on one good route and on the sixth day of our trip headed out. It was a longer trek, but much easier on my dad’s knee. He was still slow but making good progress.

The final pitch down to Lower Sand Lakes and the relatively easier trail back to the truck was blocked by a cliff band that was dangerous to descend. I had everyone set their packs down and wait as I probed the cliffs to find a way down that was safe for my teenage sons and my injured father.

Eventually, I found a steep cut in the rocks of the cliff that was filled with a remnant of last winter’s snow. I decided to kick-step down and drop my pack and then go back up and carry each of my son’s packs down myself and then carefully “spot them” them from below, placing each of their feet in the large and boot-packed snow steps I had created on my initial descent.

One by one, I ferried them down the 75-foot snow chute. It was slow going and the boys were more than a little nervous about the descent. Dad watched me take each of them down and never said a word.

Finally, the only one left was Dad. I climbed back up the seventy-five feet to where he and his pack were resting above the snow chute. I sat down beside him.

After a long silence, he said, “You are really good with those boys. You helped them feel safe in a dangerous situation.”

The boys were burning off residual adrenaline by having a snowball fight at the bottom. Dad and I just sat and watched them. Then we would look out at the green floor of the Wet Mountain Valley.

We sat silently together.

Finally, I asked him, “How’s your knee?”

Probably a little more sternly than he meant he said, “It hurts!”

We sat in silence a little more.

“I want to carry my own pack down!”

“But you better carry it,” he said.

We got up and I put his pack on my back and made my way to the snow chute. I went first so as to spot him and make sure his feet were deep in the pocket of the steps we had created. As I stepped onto the snow with his pack on my back, he grabbed my shoulder and turned me to face him and said, “Son, you are my hero.”

I never imagined in my wildest dreams that my dad would ever call me ‘hero.’ It touched a place inside of me that ached for affirmation and assurance that I had what it took to be a man. Not going to lie, tears filled my eyes making it difficult to shove his feet into those boot-packed steps down the snow chute—one foot after another.

As incredible as that moment was for me, it will fade into a distant memory the day Jesus hands me my white stone and calls me by my special name.

What will that name be for you? Will it be Courage? Beauty? Faithful? Friend? Beloved?

Jesus will say, “This is just between you and me. It’s our little secret. That’s how close we are. That’s how special you are to me.”

You will experience intimacy with God that no one else will share. Not Billy Graham, Mother Teresa, not the Apostle John himself. They will have their own name, but not yours. You will have the intimacy, belonging, and love that you have craved your whole life.

You will be made whole by love. You will be a creature of unimaginable splendor with a new name. So, keep putting one foot in front of the other. And soon enough you will hear your new name.

I am the beloved of the Most High God. I am an avid reader and writer and have been a continuous learner since my college studies in Ancient Literature and English. I live at the base of Mount Princeton in the Colorado Rockies with my wife of over three decades. I believe I have been put here to tell people that God is not mad at them and to show them the way Home. I am the father of three sons, three beautiful daughters-in-law and four grandchildren. I love to read, tell stories, and spend time in the wilderness.
View all posts by Joe Chambers →
This entry was posted in Uncategorized and tagged Identity, intimacy, Names, Spiritual formations. Bookmark the permalink.