How Do You Spell Relief?

When I kept silent, my bones grew old. ~ King David

Sir Arthur Conan Doyle, the writer of the Sherlock Holmes novels, was quite a prankster.  One day he played a prank on five of the most prominent men in his home town in England.  He sent an anonymous note to each man, which simply said, “All is found out.  Flee at once.”  Within twenty-four hours all five men had left the country.

We all live with a certain level of guilt. Left to sit in our soul, sin will cause us much inner turmoil and heartache. Unresolved guilt will leak out in our lives in a myriad of ways; from sarcasm to outright anger. It will contribute to the disintegration of intimacy in relationships. Unresolved guilt will estrange us from the God who created us.

Guilt will wreck your life leaving us in need of restoration.

When we harbor sin it causes a soul-sickness that only finds it’s relief when we confess our sins to one another and to God. I promise you, from personal experience, you will never regret the relief you will feel when you release that sin to God.

Run the Rockies Half Marathon

Earlier this summer I ran/walked a half marathon from Copper Mountain to Breckenridge. I have long since stopped trying to compete with anyone in races like that. My goal this day was to finish.  I knew I would be last because I intended to walk the 13.1 miles. As it turns out at the starting line in Copper I got caught up in the excitement of the race and began to run. I ran for 7 miles and then started walking. I would pass every aid station and tell them that I was the last guy. They would get on their radio and say Bib #817 just past we are shutting down the station.

At the end there was a giant inflatable blue arch that said “FINISH” but there was no one there to cheer for me for finishing. There were about 15 people who had “Event Staff” on the back of their shirts and when they saw me began to cheer. But I knew they were cheering that they could go home now and not for my accomplishment.

As I crossed the finish line they gave me a drink of something and a slice of pizza. I was grateful for something cold to drink and something to eat.  I called Lynette, who was shopping at the outlet mall, and she came to pick me up. I asked her to drive home because I wasn’t feeling well.

As we swerved and sloshed our way over the mountain pass I started feeling worse and worse. My stomach began to rebel against the cold drink and pizza. When we passed through Leadville I told Nette, “If I say ‘pull over’ you better not hesitate. You better pull over no matter what.”

I barely opened the door when I lost the pizza on the side of Lynette’s car and the side of the road in the most violent way.

As I cleaned myself up and laid back down in the passenger seat, I marveled at how much better I felt.  I had fought and fought to hold down that pizza and when I finally let it go. I felt like a brand new man.

Lynette pulled back on to the road, disgusted.

And then I told her how much better I felt and how it was like hiding sin in our lives and feeling the guilt and shame of unconfessed sin roiling in our souls, making us heart-sick. But then when we acknowledge our sins and release them in confession, sometimes with great force on the road to repentance, we feel so much better and wonder why we kept them inside for so long.

Do you want to know what Lynette said?

“Don’t ever do that in my car again just so you can have a story for your sermons.”

When I kept it all inside,
my bones turned to powder,
my words became daylong groans.

The pressure never let up;
all the juices of my life dried up.

Then I let it all out;
I said, “I’ll make a clean breast of my failures to God.”

Suddenly the pressure was gone—
my guilt dissolved,
my sin disappeared.

One of the basics of how I was taught to pray as a young Christian was the element of confessing of sin.  We used the acrostic ACTS that stood for Adoration, Confession, Thanksgiving, Supplication. To this day when I pray, I usually practice some form of those elements.

In our church, we have time in our service where we give space for individual and corporate confession. I’ve actually had some ask why we do it every week. It reminds me of a story a friend of mine told about a time in his service. In his service when they read the scriptures together at the end of that reading he recites a line from the prophet Isaiah:

The grass withers, the flower fades,
But the word of our God stands forever.

One Sunday a grumpy middle school girl came up to him in a huff and said, “Pastor Paul, why is that every week after you read the Bible you always say, “The grass withers, the flower fades, but the word of our God stands forever”?

The pastor leaned over, smiled and said, “That’s why.”

There is an aspect of spiritual muscle memory that happens when we do this important discipline regularly. In the same way, a basketball player shoots a hundred free throws in practice, the way a pianist practices scales; we want to practice being honest with God and drinking deeply of His forgiveness. 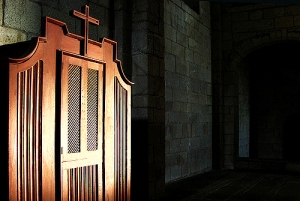 comes as natural to me as a good habit. Until it gets to the place of instinct in my life. Until being honest with God about my mess and as confident about His forgiveness is a reflex.

When I regularly practice the discipline of confession I position myself for a holy restoration. The God who created me is gently waiting for me to own up to what and who I am so that He can clean me up.

And when that happens—my heart is filled with joy. It happens every time.

And all of heaven rejoices when restoration happens on earth.

I am the beloved of the Most High God. I am an avid reader and writer and have been a continuous learner since my college studies in Ancient Literature and English. I live at the base of Mount Princeton in the Colorado Rockies with my wife of over three decades. I believe I have been put here to tell people that God is not mad at them and to show them the way Home. I am the father of three sons, three beautiful daughters-in-law and four grandchildren. I love to read, tell stories, and spend time in the wilderness.
View all posts by Joe Chambers →
This entry was posted in Uncategorized and tagged Christian maturity, grace, healing, Repentance, Restoration, spiritual formation. Bookmark the permalink.

2 Responses to How Do You Spell Relief?