The center of a Christian’s life is a cosmic act of extravagant and infinite generosity. God is willing to spend everything to have us, to love us, and to embrace us.

In Jesus, the transcendent Creator takes on the appearance and likeness of the creature.  He doesn’t come into this world as an emperor, King, President or CEO, but as a fetus.  He was born in a stable to a blue-collar Jewish worker.

The second person of the Godhead who knew what it was like to be everywhere at the same time now knows the binding confines of skin. He has to use doors!  Ride animals. Eat and sleep. The God of the Universe now has to say, “OK, Mom.  Yes, sir, Dad.”  Think of the humiliation Jesus must have felt when he traveled among mere men who did not bow or cry out in adoration and worship.  The creator is now rubbing shoulders with men he had created.  Men who would growl, “Get out of my way Jew-boy!  Who do you think you are?” 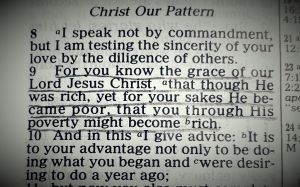 I remember my first paying job. I was five years old. My father had turned over a plot of ground behind our house with a spade and I wanted to help. Of course the shovel was too much for me to handle so he gave me the job of breaking up the dirt clods left behind and preparing the ground for rows.

I was, again, too small and uncoordinated to handle a garden rake so he had the idea of taking a remnant of a role of hog wire that was about 12 inches in diameter and running a

rope through the core of that tube of wire and making a loop with the rope. Then he put me in the traces of that loop of rope tied to that roll of wire and told me to walk up and down the turned ground until the dirt clods were all knocked down and smooth.

I imagined I was Samson working for the uncircumcised Philistines after he had been turned in by Delilah and blinded. After I finished the job my parents paid me fifty cents—in nickels. Ten nickels!!! I was thrilled. That money went a long way in 1963. Think of all the double bubble gum that would buy!

Then my parents thought it would be a good idea to teach me about tithing. Said that I had the privilege to give one of those nickels the coming Sunday in the offering plate when it was passed.

I don’t remember thinking that “having the privilege” to give was such a great thing. That would be like saying, “Joe, you get the privilege of eating cooked carrots tonight at dinner.” Or, “Son, you have the privilege of getting your baby teeth pulled tomorrow so that your adult teeth can come in smooth and straight.”

Why did I feel that way? Because I hadn’t yet been properly overwhelmed by God’s generosity on a hill called Calvary.

One of the telltale signs of a deep work of grace in a person’s life found in Scriptures is that the person becomes a generous person with whatever material things they possess.

Look deeply at the cross until you fall so deeply in love with Jesus that bubbling up from your soul comes affection, love, and generosity. That is how your soul is formed. Shaped into the character of God.

And remember, we are never more Godlike than when we give.

For God so loved the world that He gave…

I am the beloved of the Most High God. I am an avid reader and writer and have been a continuous learner since my college studies in Ancient Literature and English. I live at the base of Mount Princeton in the Colorado Rockies with my wife of over three decades. I believe I have been put here to tell people that God is not mad at them and to show them the way Home. I am the father of three sons, three beautiful daughters-in-law and four grandchildren. I love to read, tell stories, and spend time in the wilderness.
View all posts by Joe Chambers →
This entry was posted in Uncategorized and tagged Christian maturity, giving, grace, Gratitude, spiritual formation. Bookmark the permalink.